Alleppey – Life at the Backwaters

The Kochuveli express from Bangalore chugged into the drenched platform of Alappuzha aka Alleppey. The pictures that google threw were dreamy and expectations were soaring high. We ruled out resorts as we are budget travelers and we even ruled out house boat for we did not went to spend our day only on the boat (costly too!). We booked a humble homestay which read, "open your doors to the backwaters". Our tuk tuk went through narrow streets and stopped at the backyard of somebody's house and the guy in mundu looked up from his morning newspaper. While we were wondering is this it, a canoe was summoned. And that is when I turned to see the calm greenish backwaters. The canoe looked smaller than me and am super scared of water. While I was sweating, clutching hard to the sides of canoe wondering when it will sink, my friend asked me to stop fretting and take a moment to look around. There! Early morning mist was settling in, the huge house boats were floating around, coconut trees leaning in, our little canoe in the middle vast stretch of water and just the sound of oars going in and out of water, may be this is what is called Heaven! Welcome to Alleppey, Venice of East India. 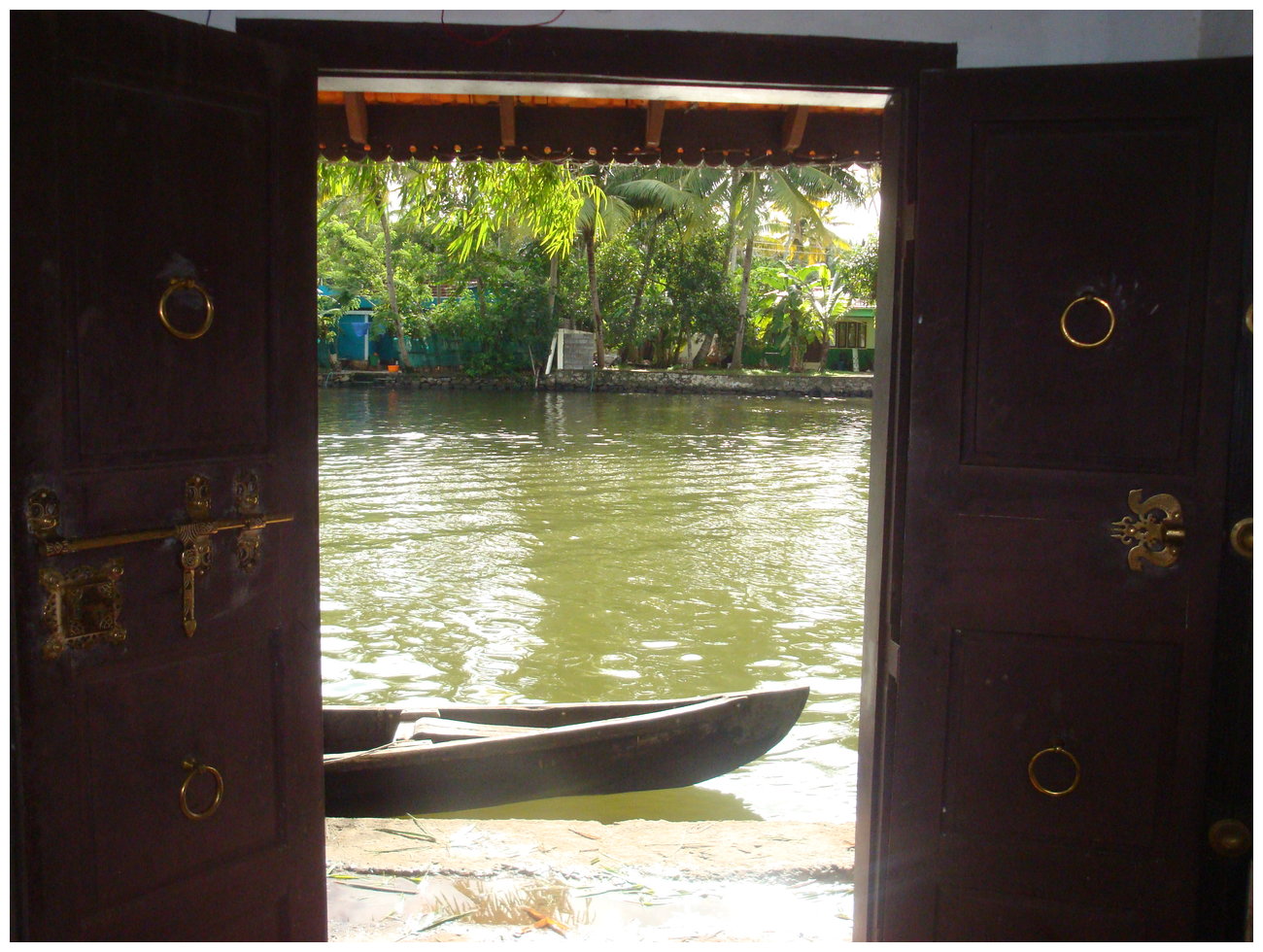 Alleppey, famous for its canals and backwaters stay trued to all the dreamy pictures that I had seen. It was a small home stay with 5 rooms let out and the gates of the house opened right into the canal. All the houses for that matter is like that. They live on the canal, steps lead to the canal, boats and canoes stop by and people hop in, the sellers row through the canals with their products; totally a different way of living. After stuffing ourselves with yummy puttu kadalai curry, we hired a small boat to cruise through the canals (can I call it gondola?). And then the life of Alleppey was unfolding beautifully before me.. 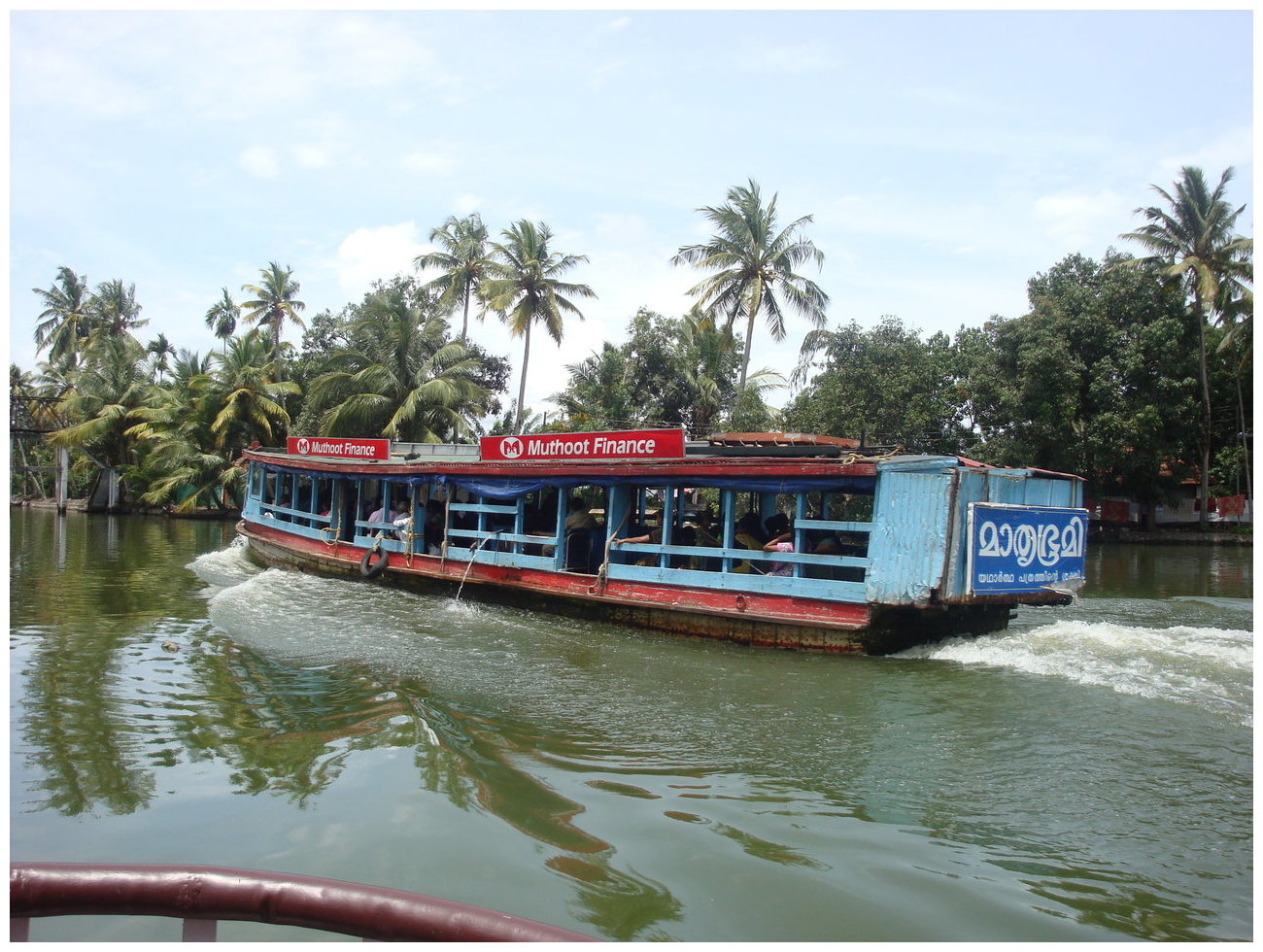 The public transport of Alleppey[/caption]   The boat station like we have bus stations.. [caption id="attachment_986" align="aligncenter" width="700"] 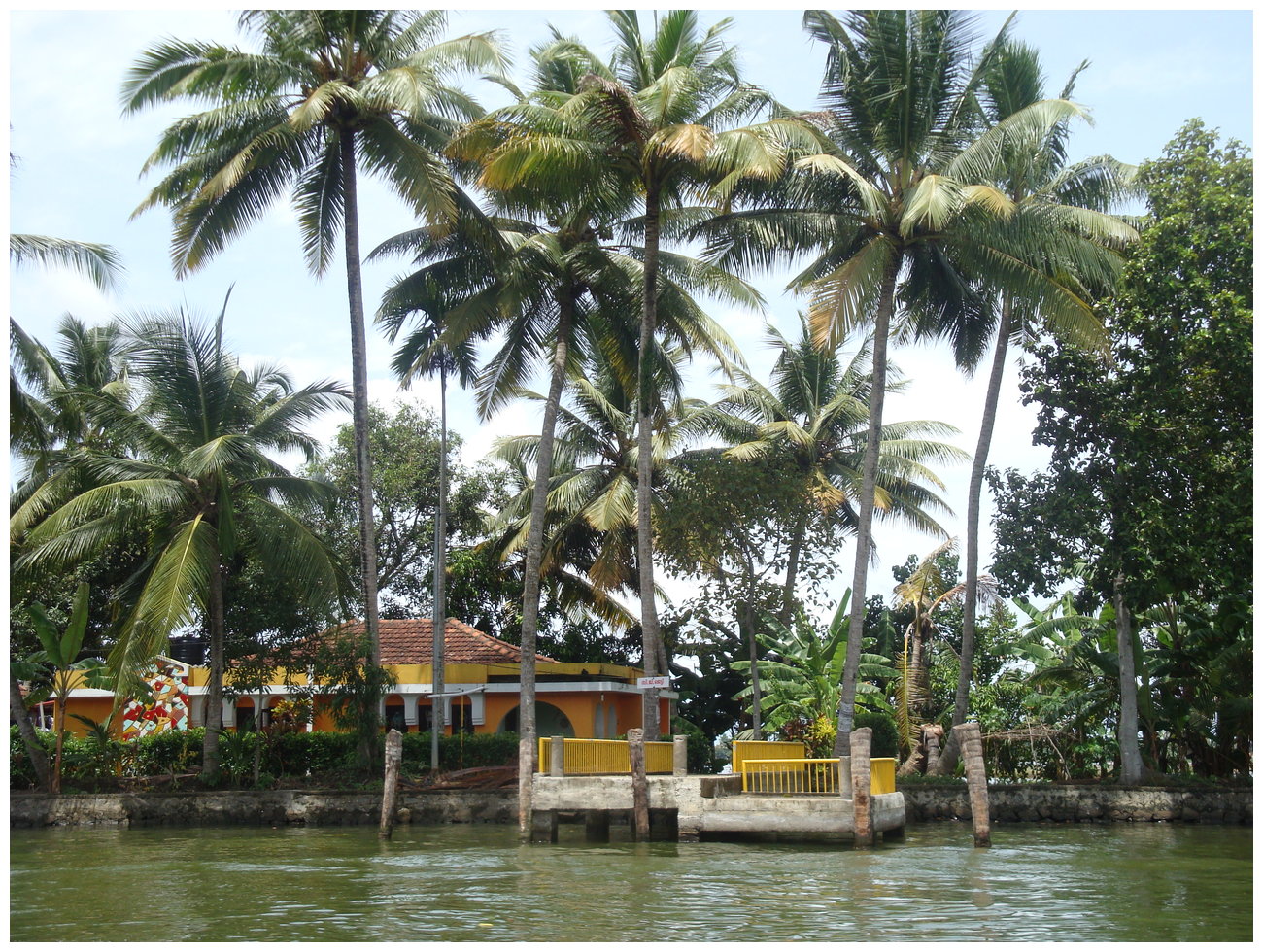 A boat station seen along the canals[/caption]   A temple aka Ambalam on the shore. The boat stops by the steps and you have to hop out. [caption id="attachment_987" align="aligncenter" width="700"] 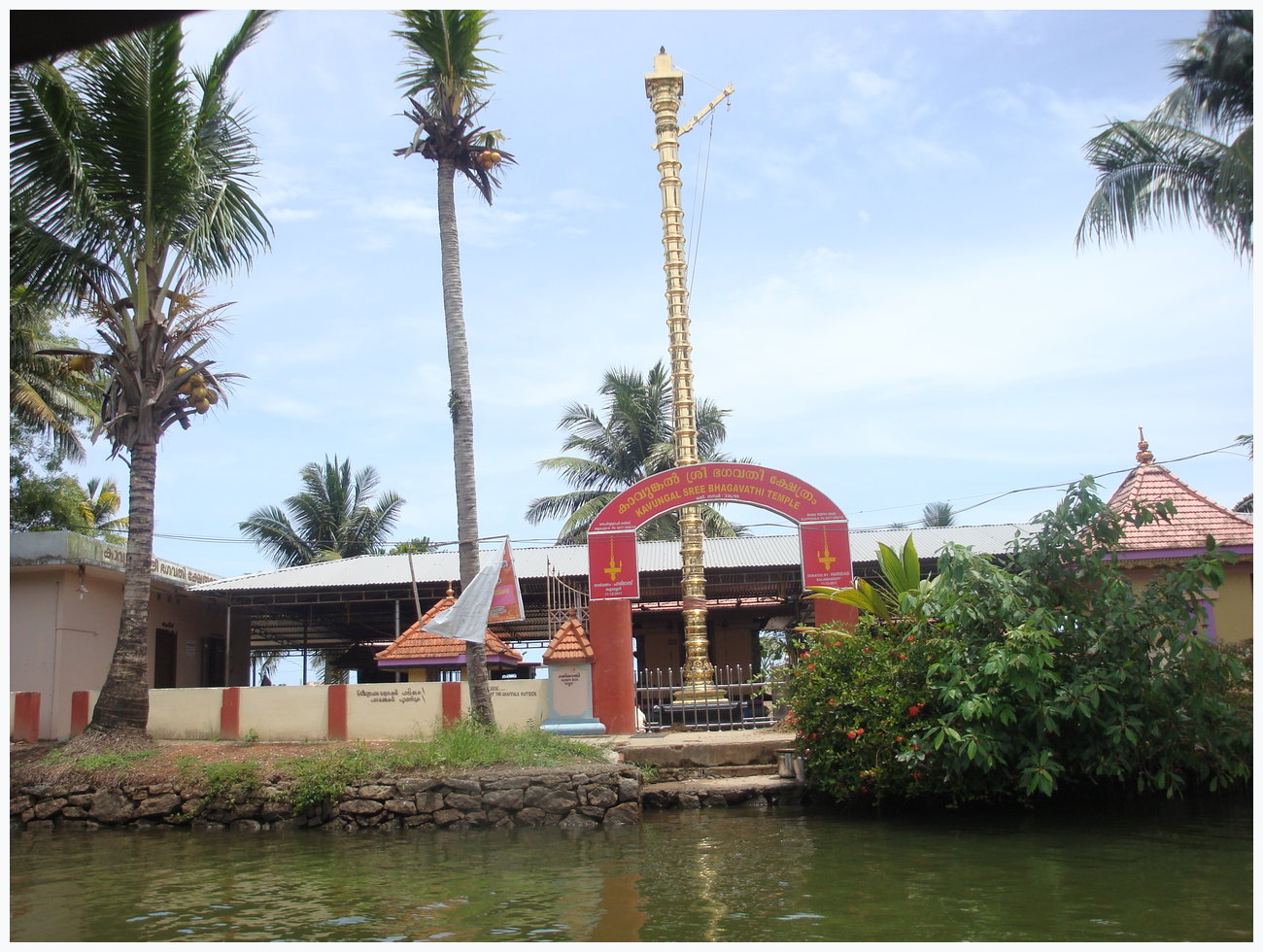 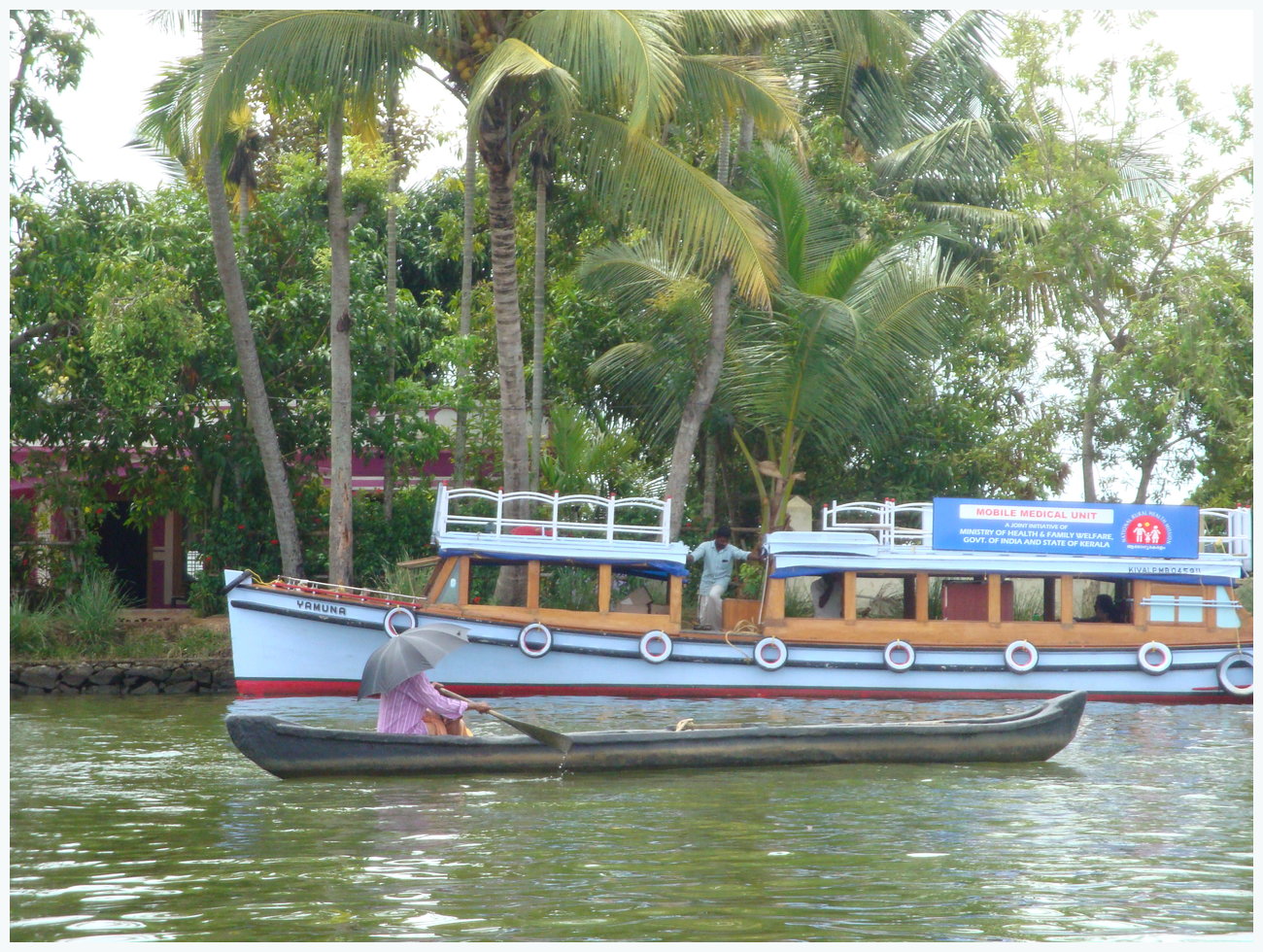 Water Amulance[/caption]   A guy selling fish and the cats were following him as he rowed by.. Many were also sitting by the steps of their house and were catching fish.. [caption id="attachment_993" align="aligncenter" width="706"] 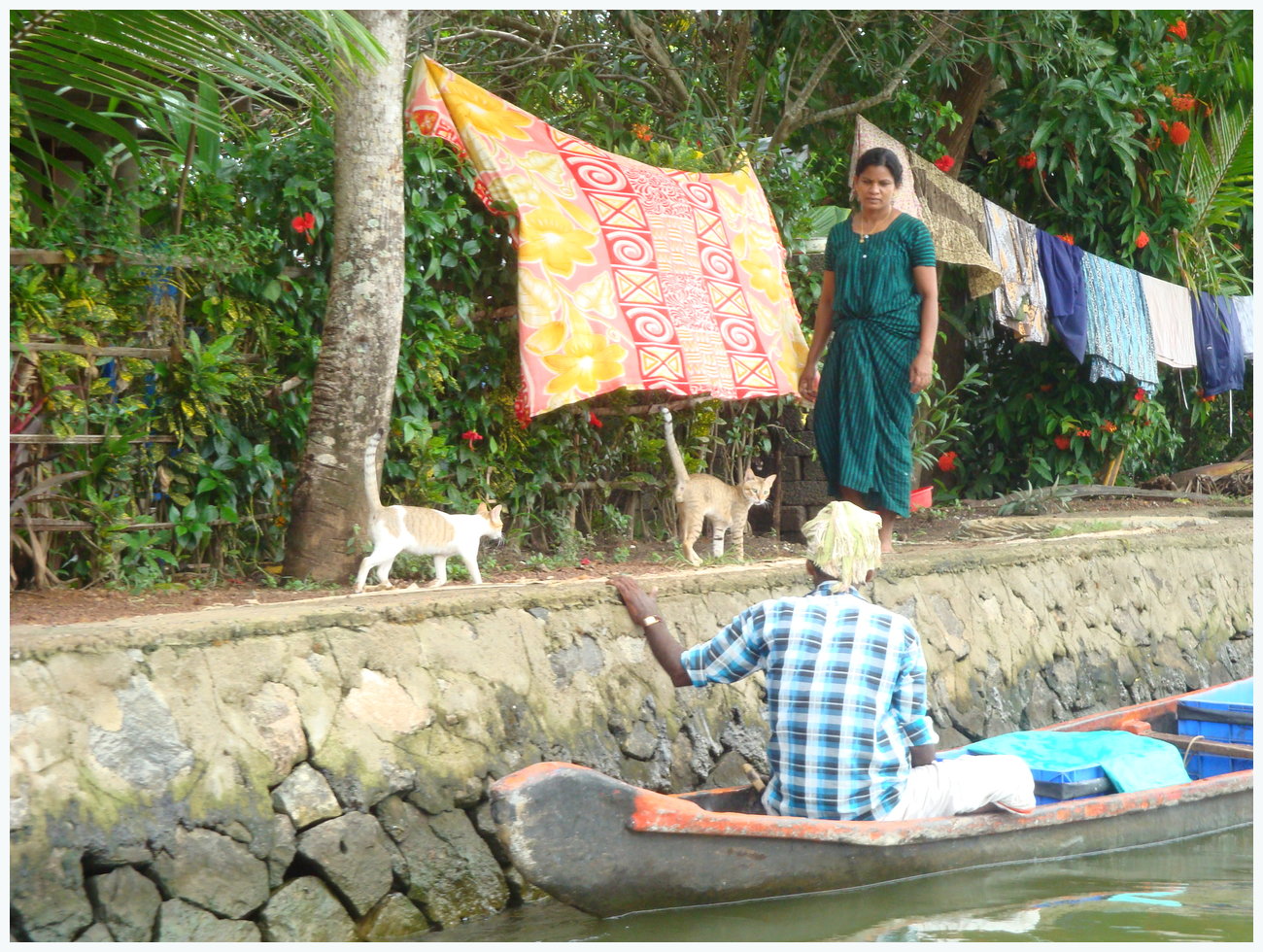 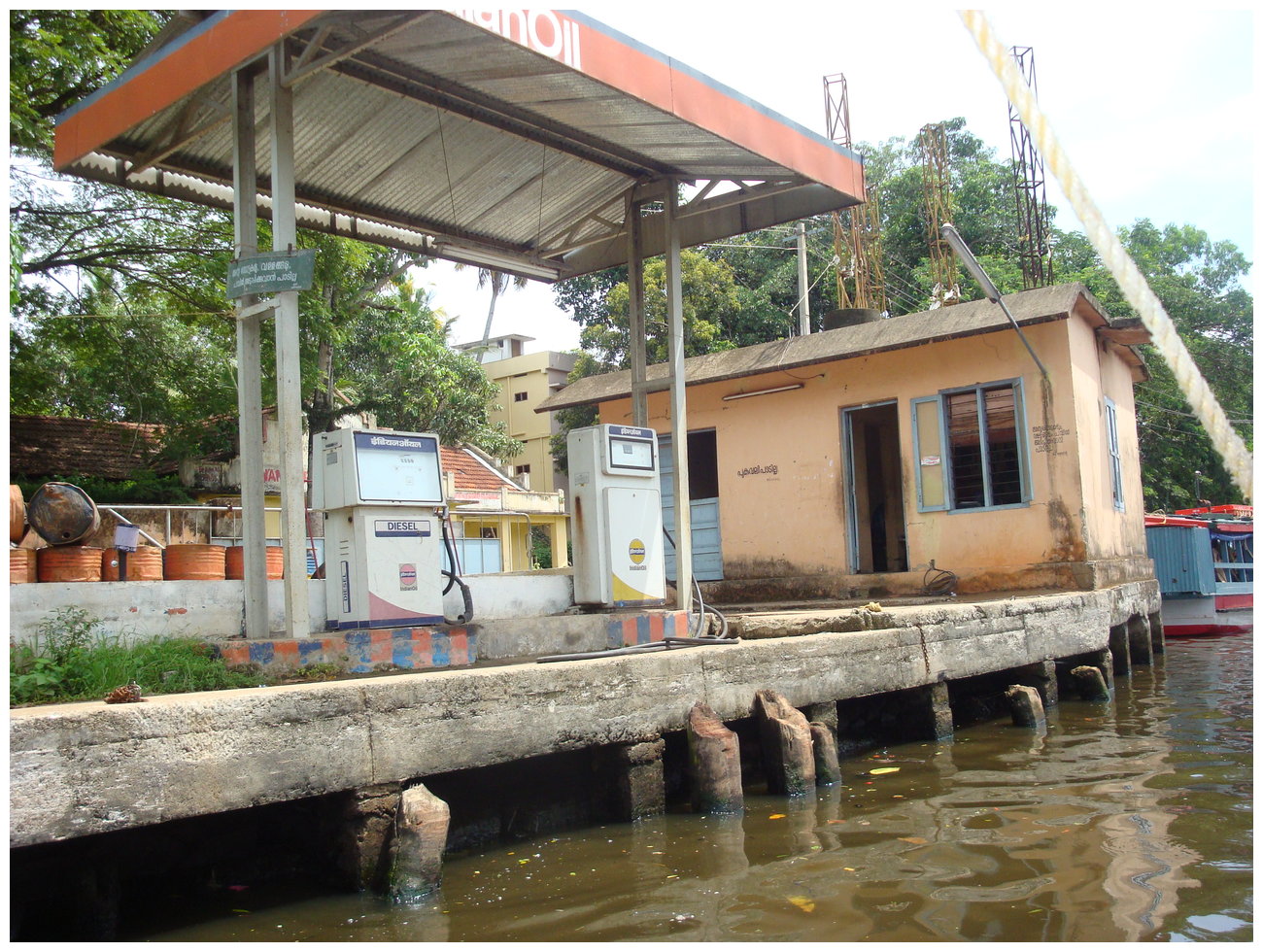 Petrol bunk[/caption]   It was all different and custom made for Alleppey. As you cruise through the canal, one side is the Kuttanadu paddy fields. Unfortunately the monsoon was heavy that most of the paddy fields got submerged in water. During monsoon salt water enters into the canals making it not of much use. The canals open up to the huge Vembanand lake. It was so vast that I could not believe it to be a lake! It looked more like sea and huge boat houses were floating around. If you hire a house boat they pretty much get deeper into the lake and anchor to let you float around.   [caption id="attachment_988" align="aligncenter" width="702"] 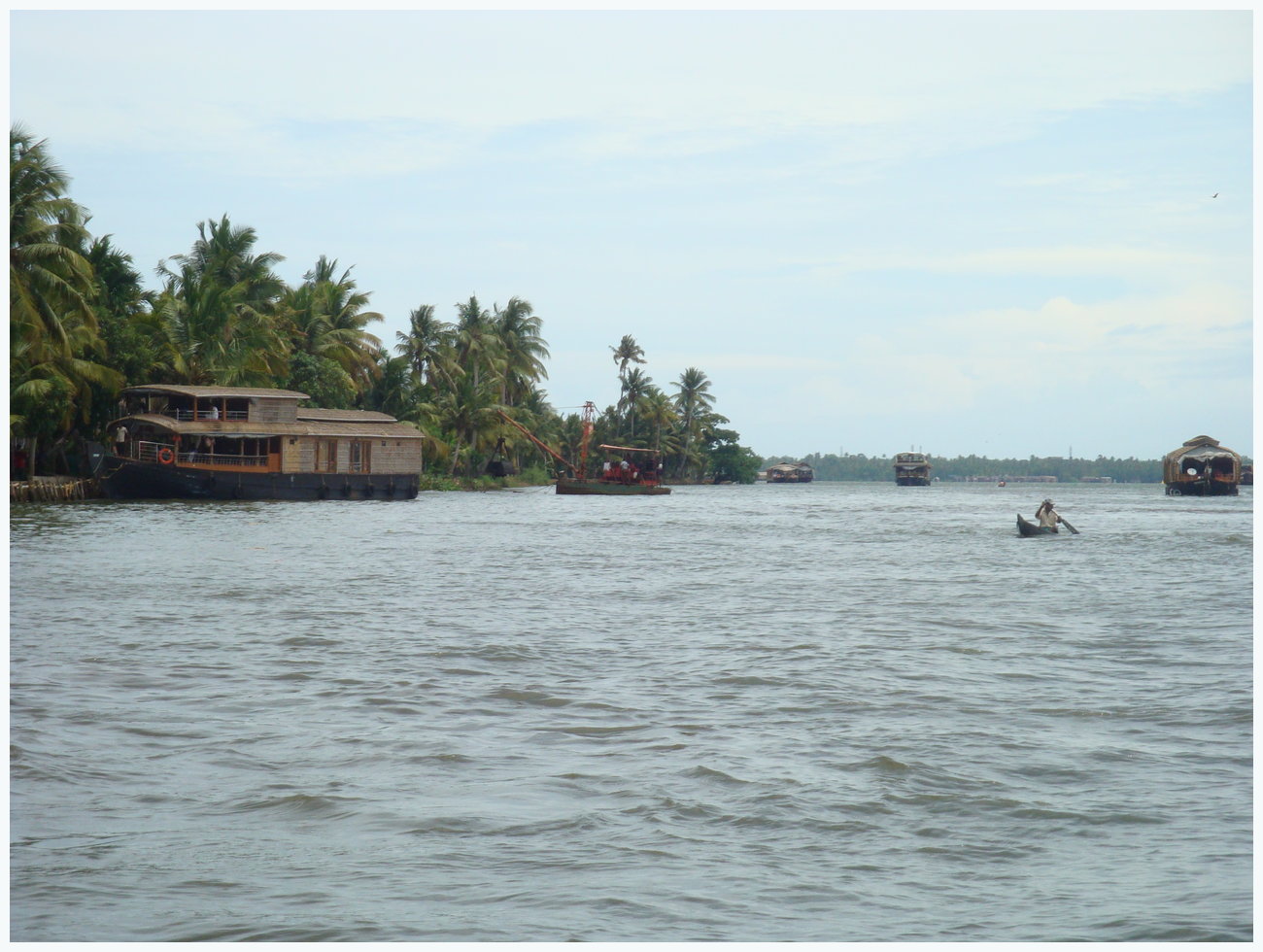 Alleppey Backwaters[/caption]   We came by a house which had the legendary Snake boat parked in front of it. The Nehru trophy boat race is very famous and attracts lot of tourists. To imagine such calm waters will be so fiercely pierced by these boats seemed beyond imagination. During this time they also serve Aranmulla Vallasadya, a special meal with 64 dishes, at the Aranmulla temple to celebrate the boat race. Hope to get my hands on it one day.. [caption id="attachment_994" align="aligncenter" width="703"] 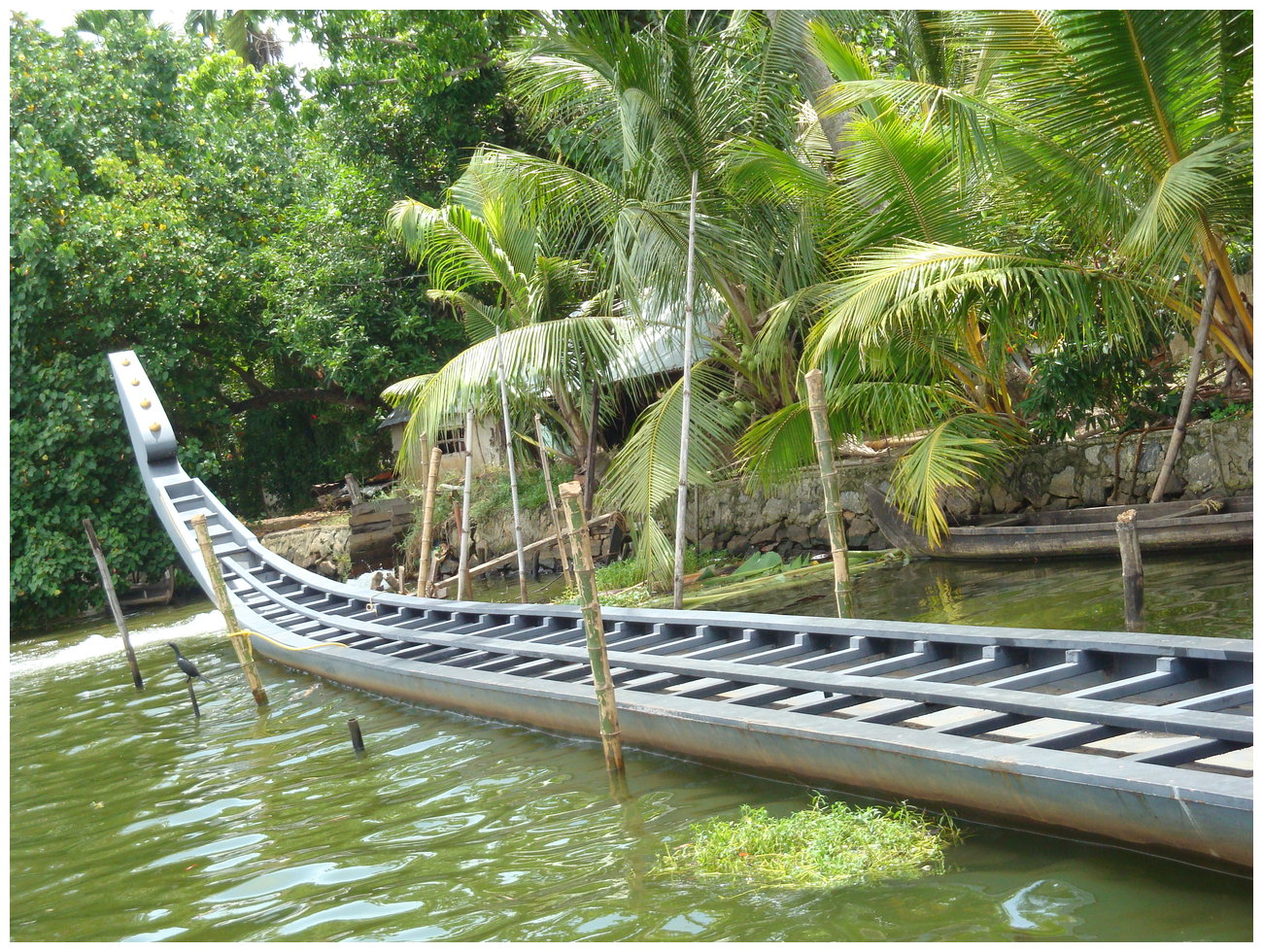 Alleppey snake boat[/caption]   Alleppey is one destination that I want to visit again.. I mean who wouldn't want to wake up to a view like this?! :) [caption id="attachment_989" align="aligncenter" width="707"] 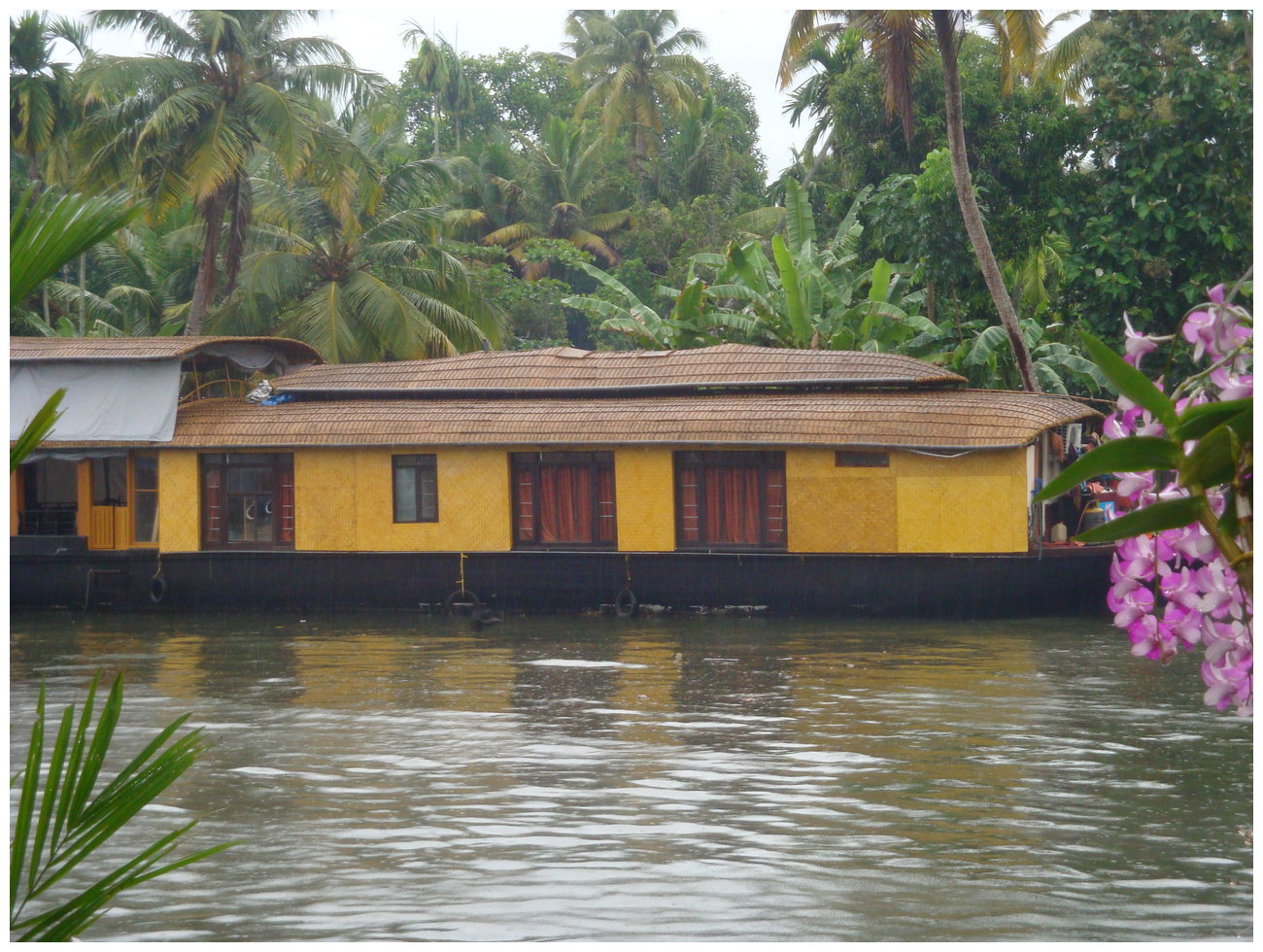 
How to reach Alleppey

PIN IT to your Board 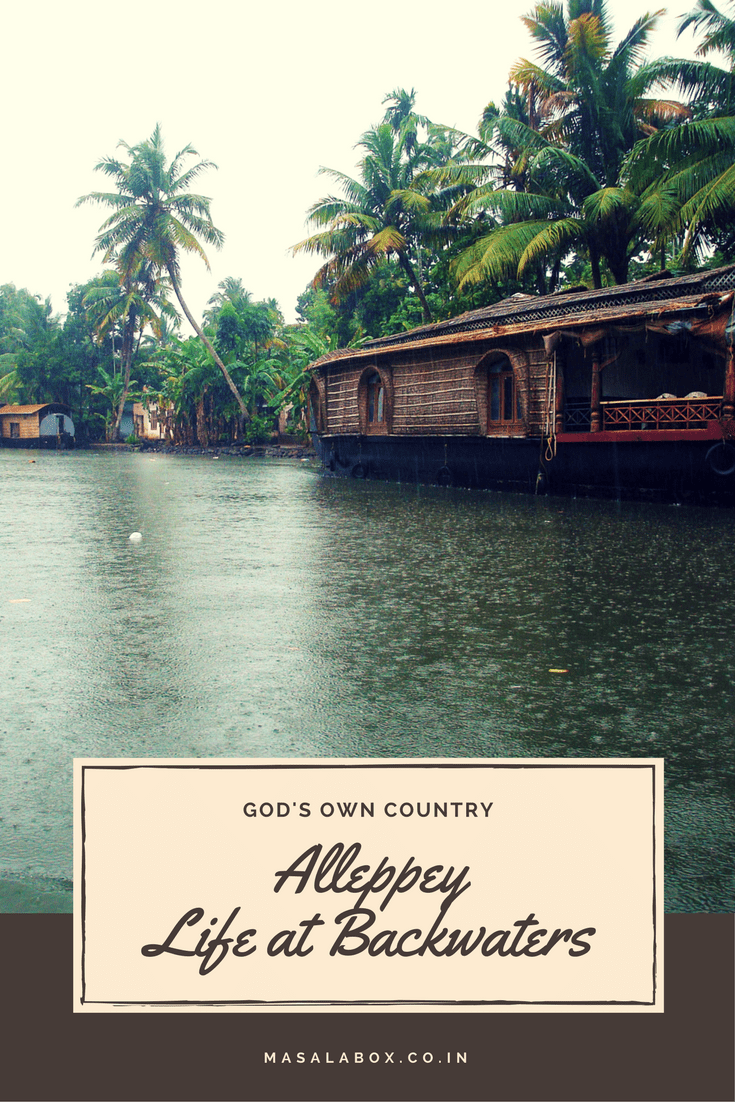 8 thoughts on “Alleppey – Life at the Backwaters”

One of Favourite melodies from Sarvam movie, “ka

Irani Chai at Nimrah cafe and next time am taking

Wayanad is pretty huge for sightseeing and your in