Get Adventurous with Gaj Retreat Punjab
Skip to content

Get Adventurous with Gaj Retreat Punjab

India / MasalaBox Reviews
I had an early morning flight to catch and was busy getting my backpack stuffed. The weather app showed a bright sun for the next few days and I was looking forward to just look at fertile green lands under a bright sky and drink lassi. I have always wanted to visit Punjab. May be just a Bollywood influence of looking at the actors running through the mustard farms and dancing to the tunes of bhangra. So when the opportunity showed up I immediately packed my bags. The itinerary read I will be whisked off to Gaj Retreat Punjab - A luxury Eco Resort and Spa! It is about three hour drive from Chandigarh. Though I was groggy with the sleepless night and early morning flight, my eyes lit up on seeing the paddy farms and greenery through out the way! The scenery suddenly changed from farms to driving up a hill and my host added that Mansowal in Hoshiarpur district is the only place where the terrain is hilly with forest, sharing a close border with Himachal.
[caption id="attachment_1643" align="aligncenter" width="714"] 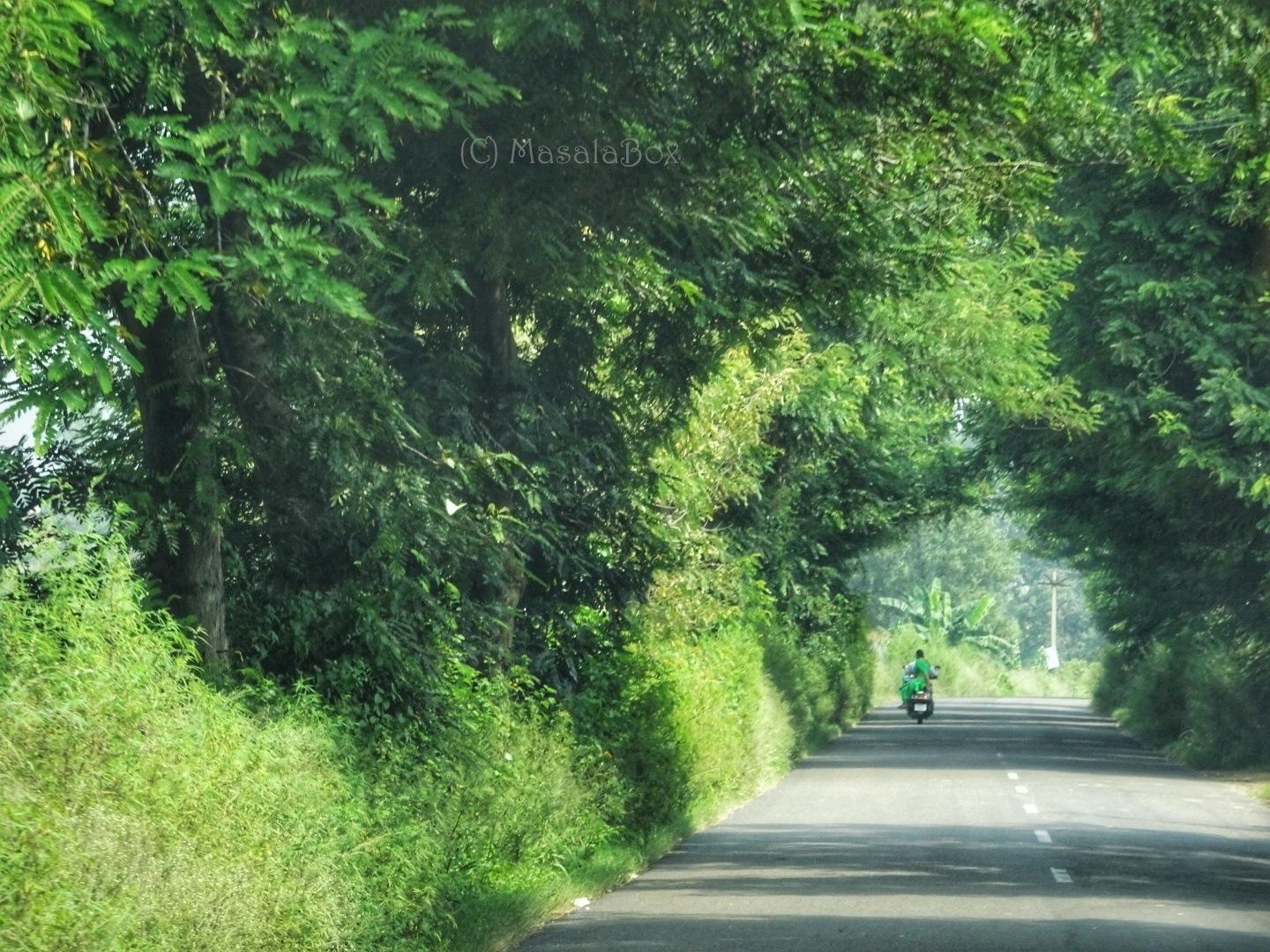 After reaching Gaj Retreat is when I realized why it is one of the best weekend getaway. The retreat stands on a hill with deep valleys all around, giving beautiful view of the gorges, irrespective of the room that you chose to stay. My suite room opened up to a big well furnished seating area, a dressing area, a comfortable bed room and a wash room with a jacuzzi as well as a bathing area. Every suite on the ground floor has its own private pool but I was happy to have the one on top with the valley view. Given a chance I would have just put up my feet and sat there watching the deep gorge that I could see from my room. But hot lunch was waiting by and can't miss my first Punjabi lunch. I was glad to see the many options for vegetarians and ate to my heart's content the paneer and dal makhani. Went around looking at other rooms and the chateau rooms looked just right for a couple. These also look out the valley. There are also few luxurious tents available to stay giving you an altogether different experience.   [caption id="attachment_1635" align="aligncenter" width="700"] 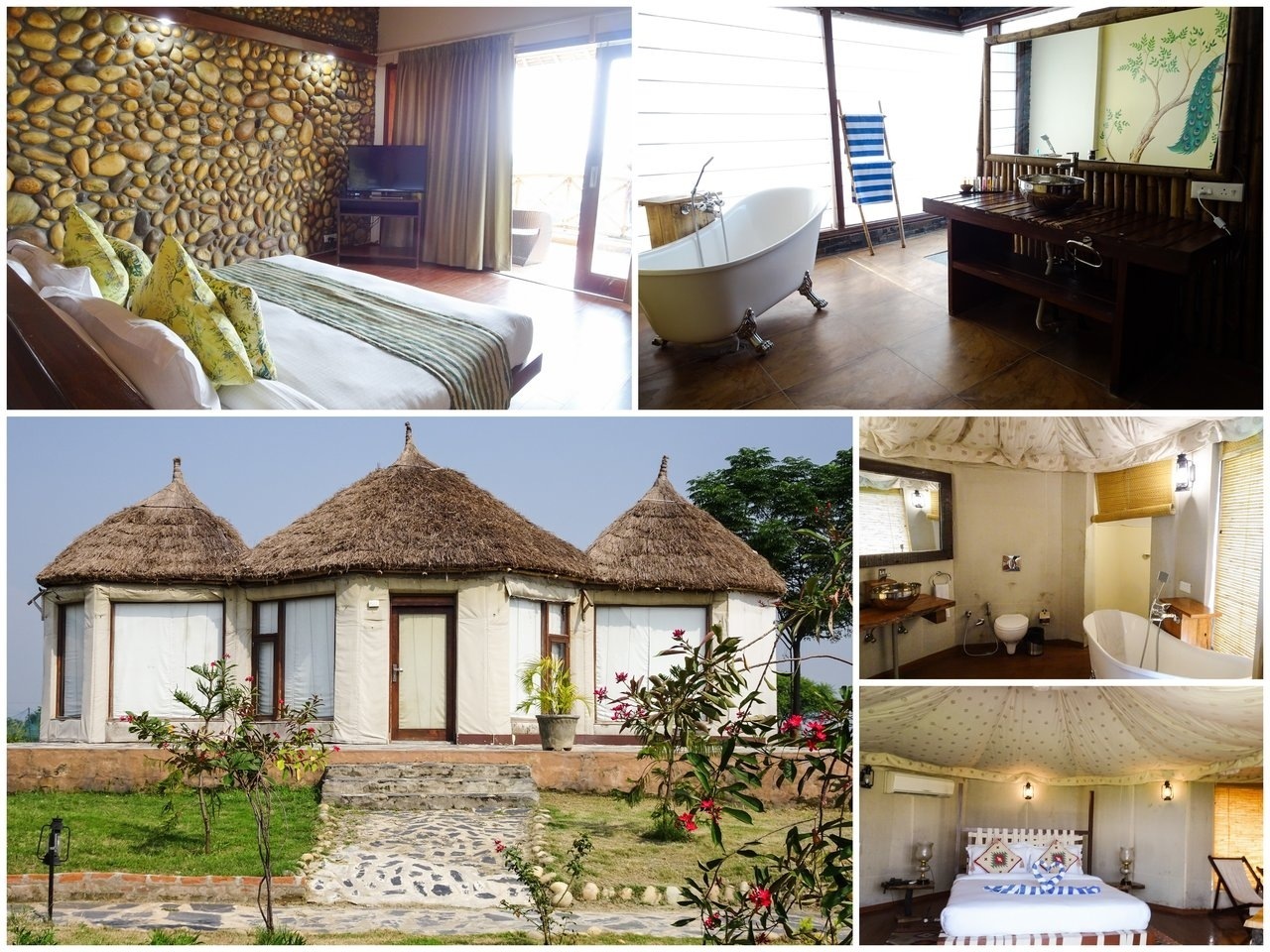 The Chateau and Tent Accommodation[/caption]

Sharing the border with Himachal, Hoshiarpur of Punjab is on the Shivalik hills, taking in the advantage of having the only forest area in the whole of otherwise flat land farms of Punjab.. And I stayed at this beautiful property overlooking the valley called Gaj Retreat.. One of those places where you can leave behind the city life completely, pick up a book, sit in your balcony overlooking the green valley, have a drink and just relax.. . . . . . #incredibleIndia #punjab #punjabtourism #shivalik #hills #valley #valleys #retreat #resort #sponsored #propertyReview #resortreview #villages #Indiantraveler #indianvillages

As the evening fell what seemed as a resort to relax was buzzing with activity. The ATV bikes were out and the guys were trying their hands on it. The property is huge and has rough tracks around it to go off-roading on the ATV. Having not much hands on driving, I watched the guys zipping through the track and at places figuring out the track as they drove on. It seemed to be a lot of fun! There were people to help you out in case the terrain was tough and you find it difficult to handle the vehicle. This went on till the sun decided to retire. I thought that was a wrap for the day. But boy was I greatly mistaken!   [caption id="attachment_1637" align="aligncenter" width="710"] 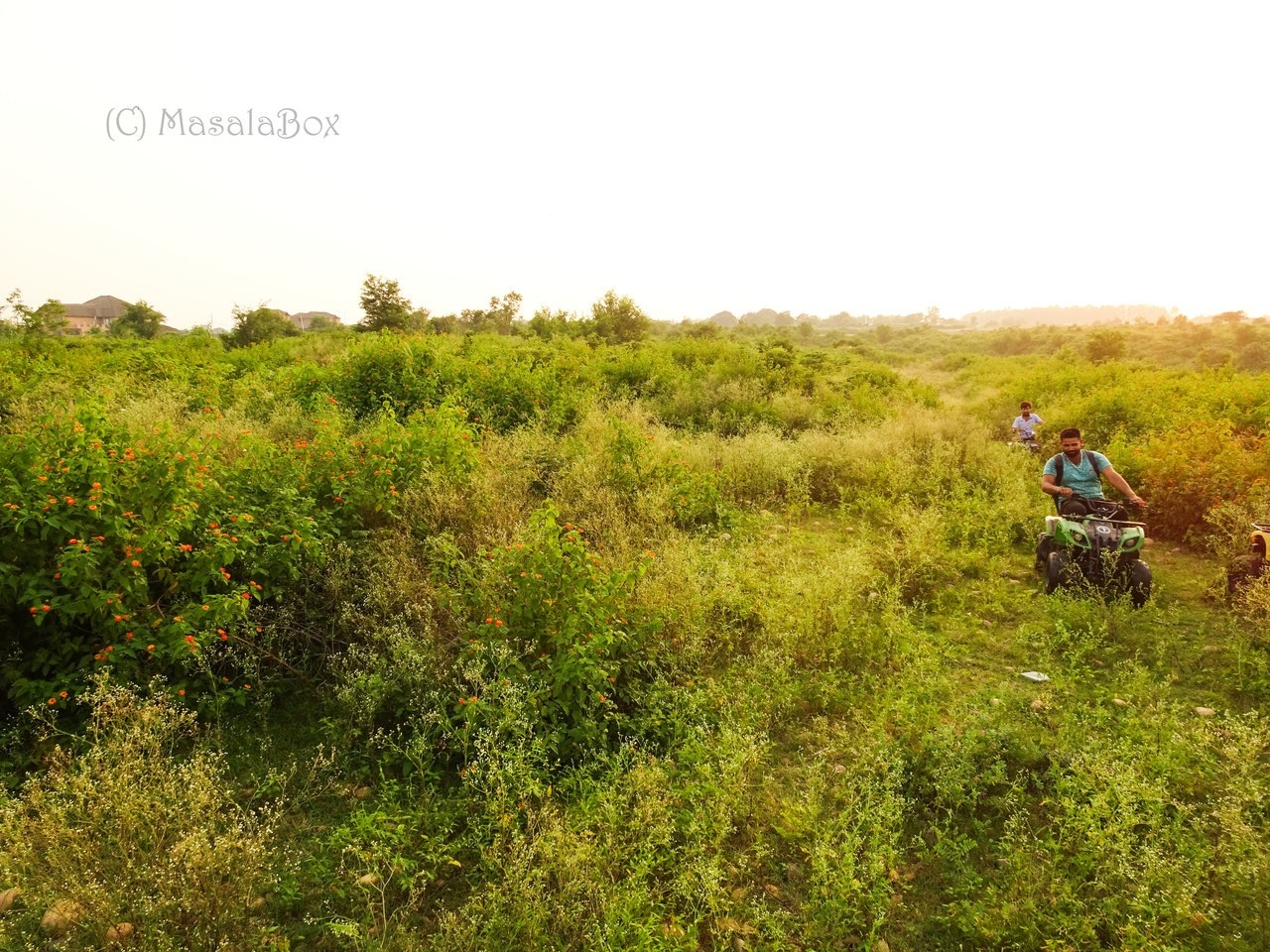 ATV off-roading around the property[/caption] With night fall I came down to have dinner only to find a vehicle ready to take you for dinner. Are we not having dinner at the restaurant, I wondered! The car went passed the quiet village and the farmlands. I was told that in winter one can see deer grazing in these farms and other small animals come out at night. We passed through narrow lanes, dirt roads and then no roads. There, dinner by the river was setup! River swaan was flowing by, the rough river bed added to the drama, the night sky was glittering away with stars, the tables were setup with candle light and the kebabs were getting grilled at another side. If you are looking to do something romantic this has to be it! We were a small group of travel bloggers and the conversations flowed between drinks and mouth watering kebabs.
[caption id="attachment_1639" align="aligncenter" width="702"] 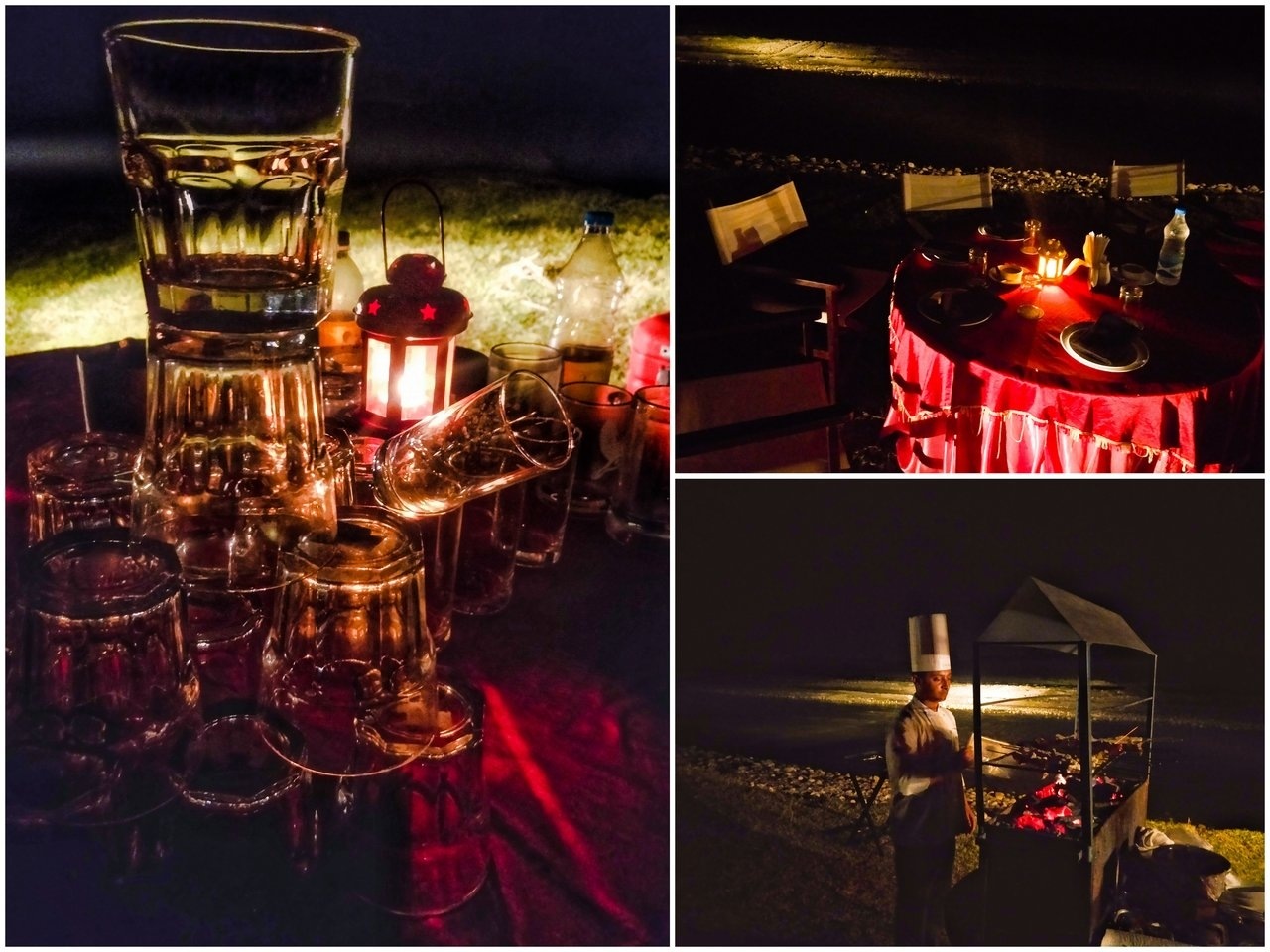 Dining by the river in the night[/caption]
Like the night cannot get any better the cars vroomed and the host asked do you want to see some adventure. Without any hesitation, I got into the car and buckled up the seat belt. The cars took a turn, got into the rocky river bed and then he lowered into the river, my eyes went wide wondering what he was doing, without second thoughts it dashed into the river! The river was shallow but I definitely thought that the car is gonna get stuck any moment and I will have to get down in the middle of the river! But no! He came out the other side and just when I finished my prayers, he took a turn and dashed into the river again. This time I was completely thrilled with the water splashing and the beast roaring through the rocky river bed.
[caption id="attachment_1633" align="aligncenter" width="690"] 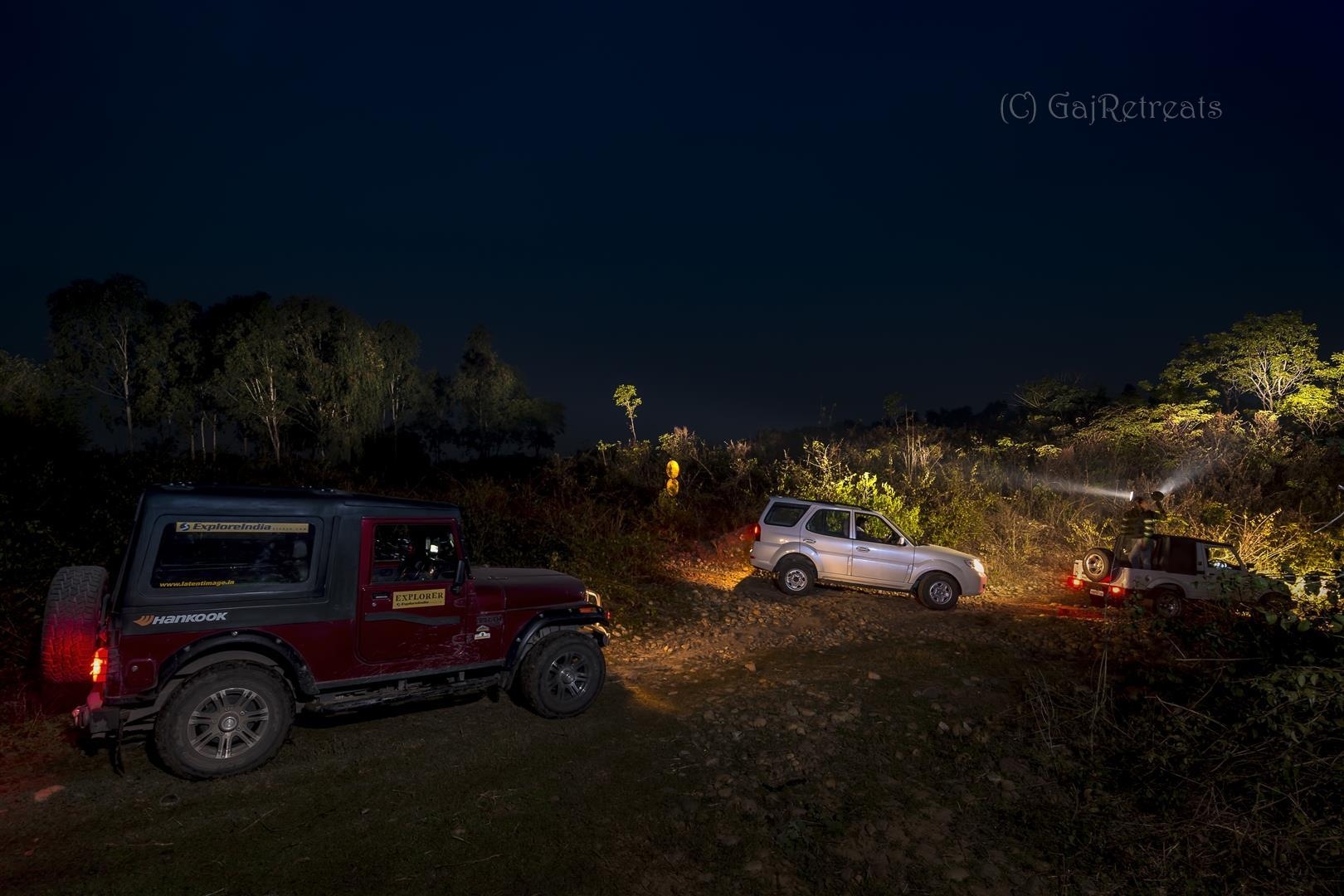 Off-roading into the unknown[/caption]
The adventure was not over yet! I was all excited and wanted more of it. The car then headed to a dry river bed. Nothing but huge polished rocks that the river had left behind. A fox scurried away. And we drove over it for quite sometime. And out of the blue the car took a turn into thick bushes. Just thick bushes. Cutting across them, making a path he was just driving. My eyes were wide and mouth had almost run dry looking at heading into the bushes into nowhere. At one point I gathered some words and asked, "do you know where you are going?". He smiled and said he knows every stone at this place. The forest got thicker and thicker and i just couldn't close my mouth in awe! I was like how on earth will we be able to come out of this, am sure we are all lost in the jungle and some predator is gonna come for me! At some point we did come out into the road and back to Gaj retreat and back to my room but my eyes were still wide and my mouth was still open! I just can't believe that I went on this crazy ride!! [caption id="attachment_1640" align="aligncenter" width="700"] 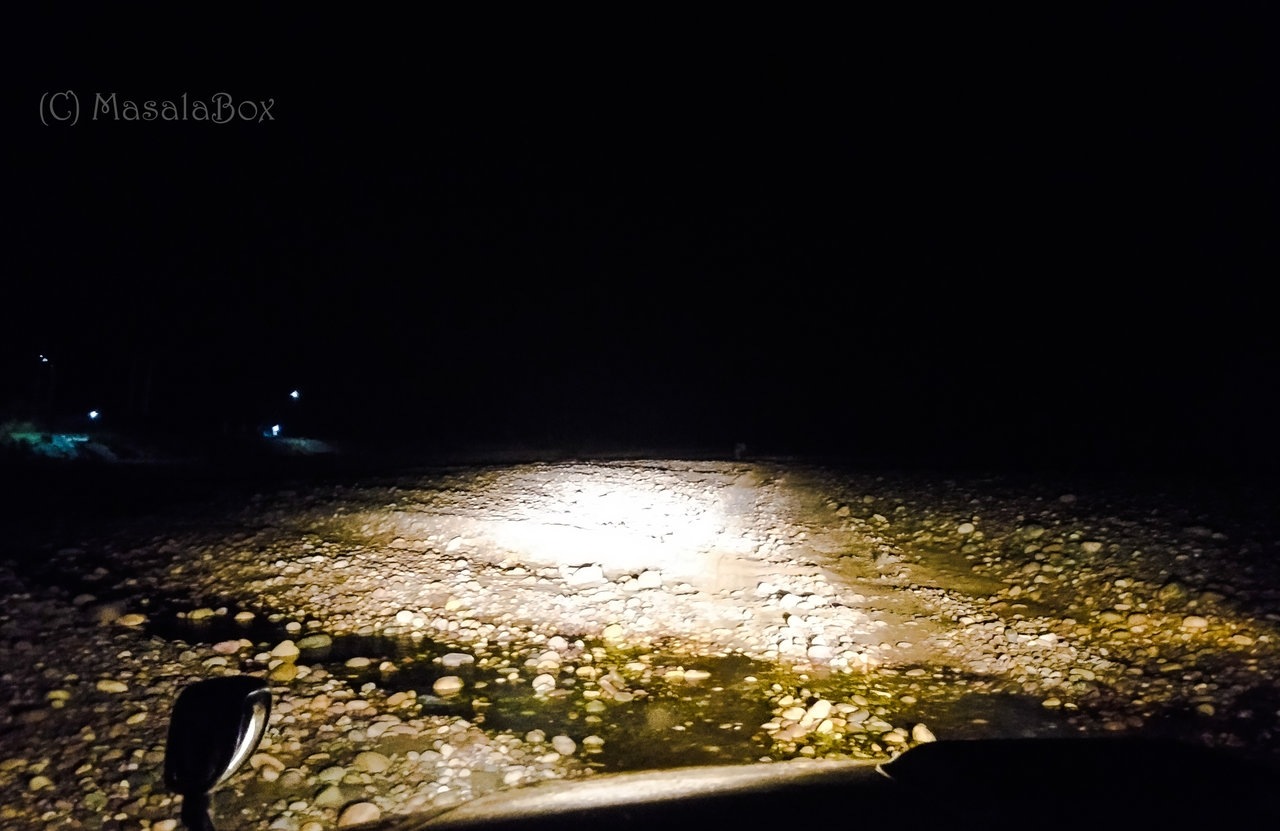 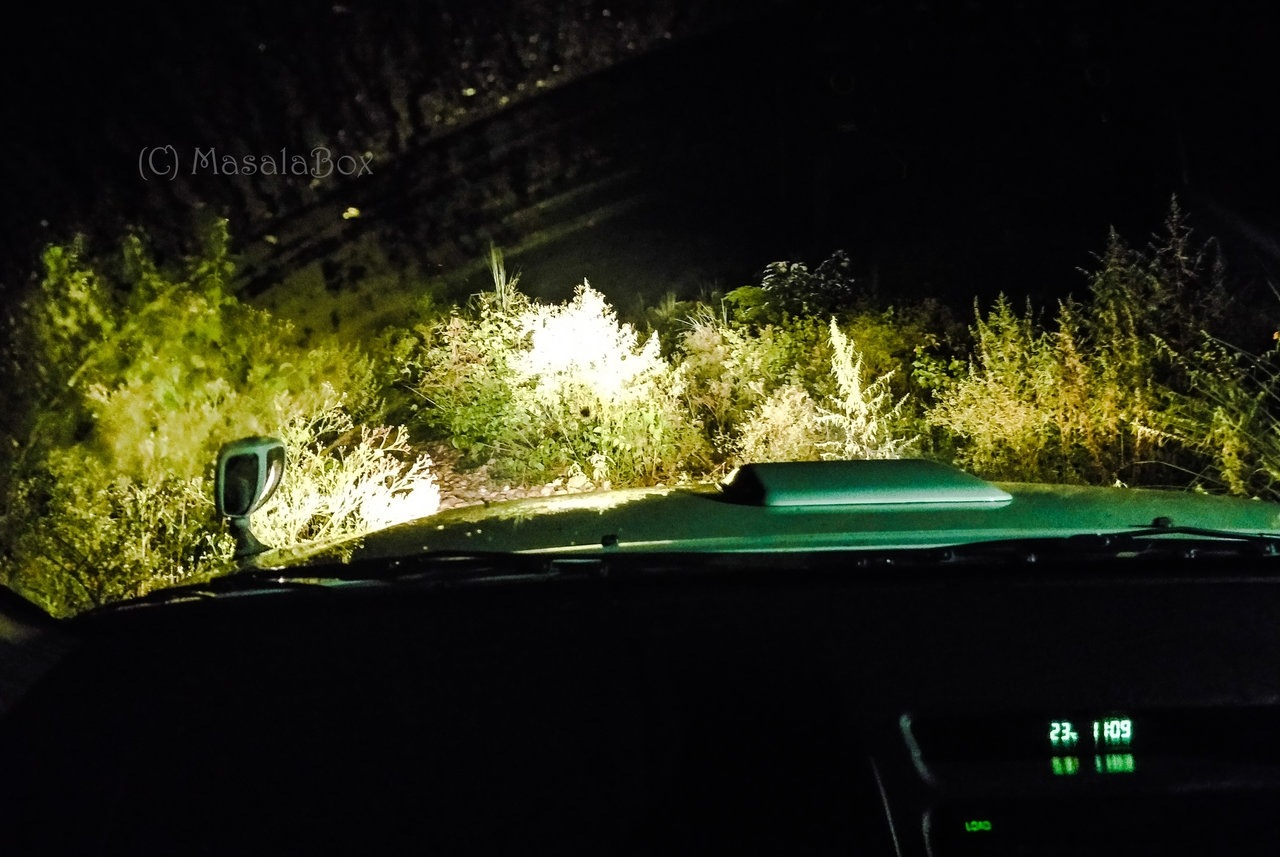 Off-roading in the jungle[/caption]   Note: The dinner by the river and the off-roading comes at an additional charge. One can also opt to explore nearby villages and get some hands on pottery. I woke up to the parakeets screeching in the balcony. It was a day to explore the nearby places. Our next destination of the day was Anandpur Sahib   [caption id="attachment_1634" align="aligncenter" width="708"] 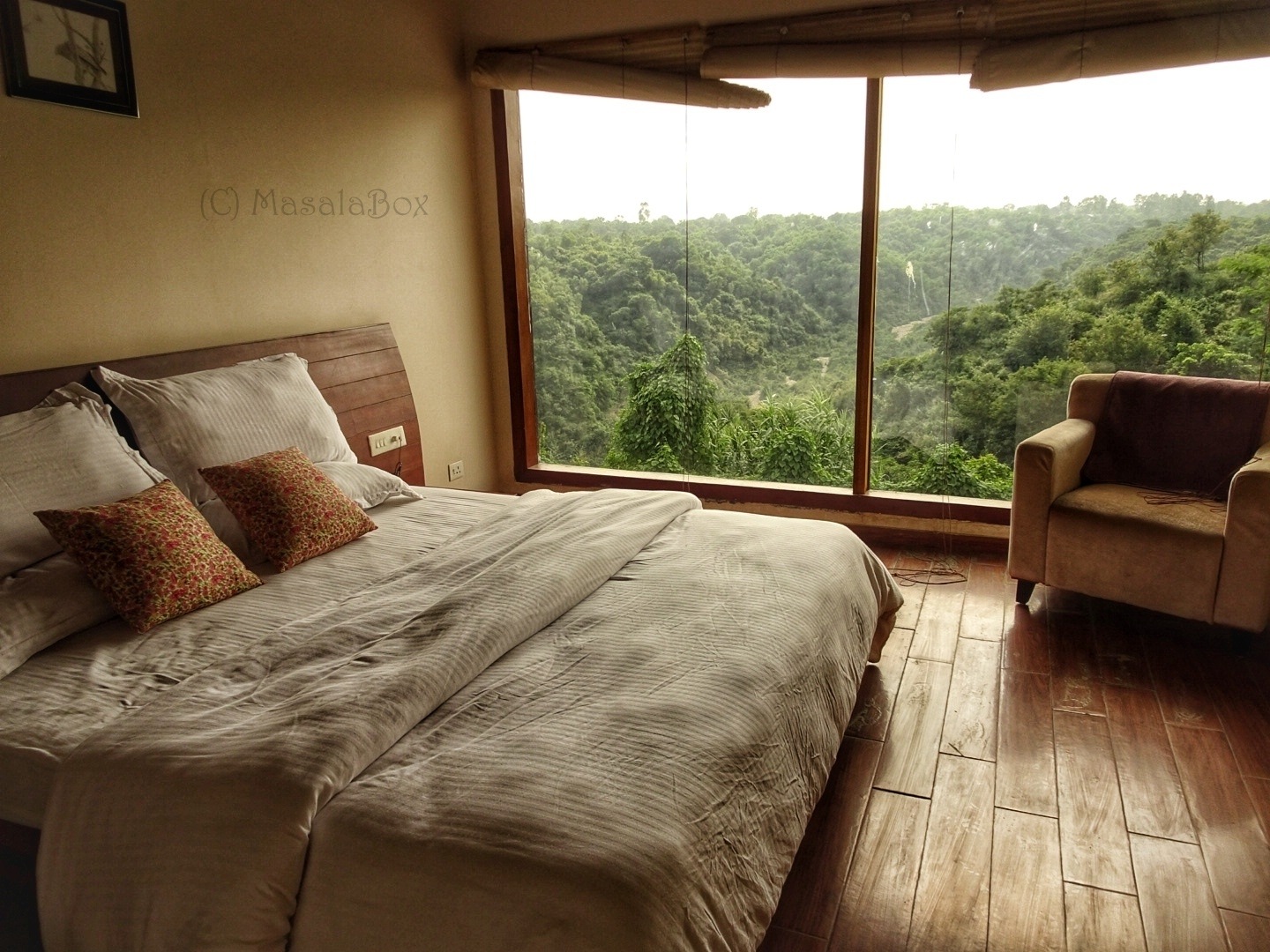 View from my Suite Room[/caption]

En route you can also visit the Bhakra Nangal Dam. Anandpur Sahib is one of the most sacred places to visit for Sikhs. If you have heard of Hola Mohalla Sikh festival then Anandpur Sahib is not new to you. The place is known for it. The central place of Anandpur Sahib is the Gurudwar of Thakat Shri Kesh Garh Sahib. This revered place is birthplace of Khalsa. Khalsa was initiated by the last guru, Guru Gobind Singh. The Khalsa tradition is what sets apart a Sikh from rest of them. It defines what you need to wear as a Sikh, how to behave and even the titles of Singh and Kaur was formulated through this. I was fortunate to be present at this holy place and to take the blessings. Had a fulfilling lunch at the langar and needless to say am always amazed to see the kind of selfless service that is done at Gurudwars.   [caption id="attachment_1638" align="aligncenter" width="700"] 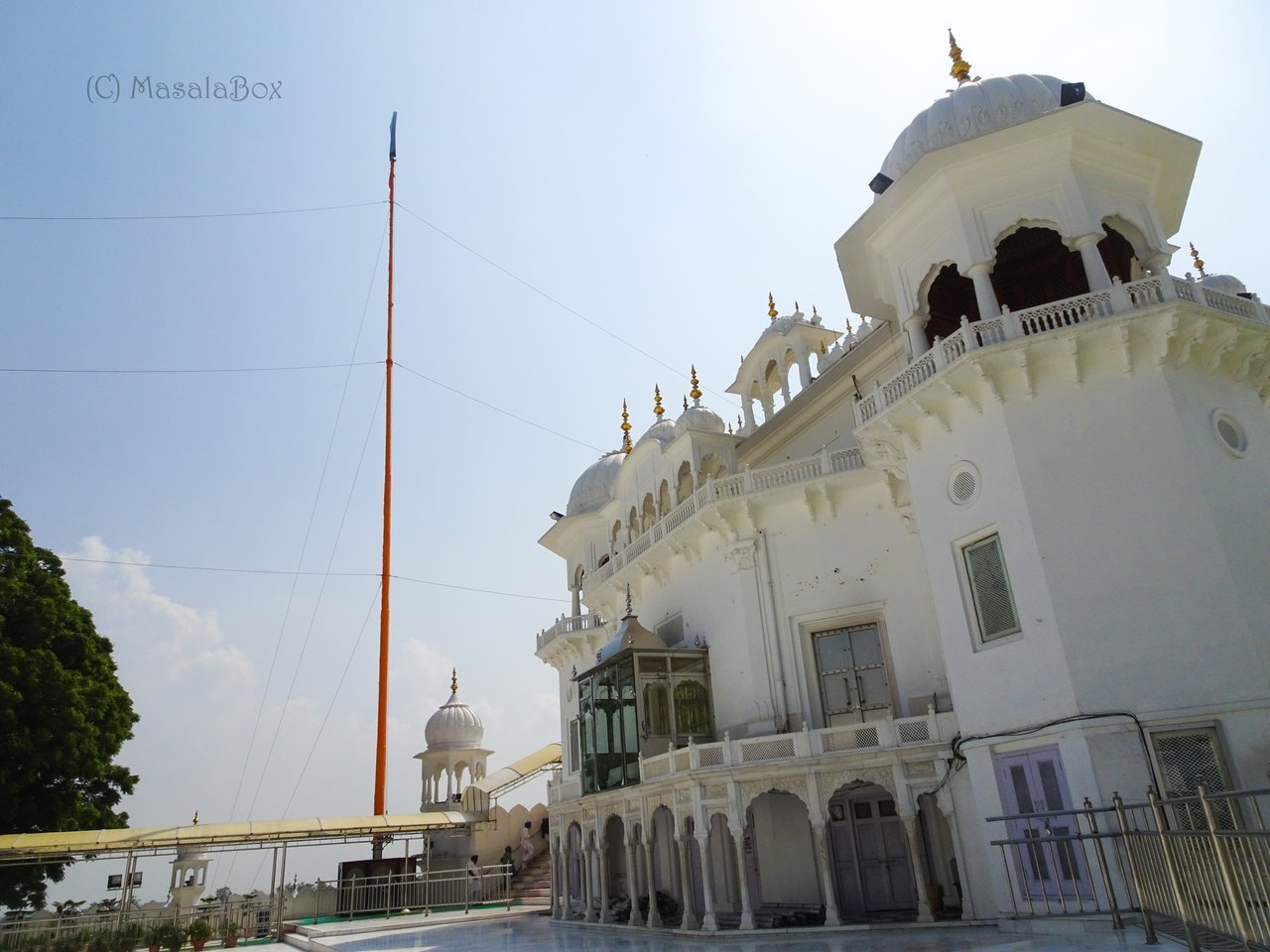 Takht Sri Keshgarh Sahib -
Anandpur[/caption] The other point of interest is the Virasat-e-Khalsa - a museum on Sikhism. This was the best start for my Punjab trip. Right from the birth of Sikhism to the wars fought upto independence, everything is depicted in this museum. The museum is so huge that if not for my friends, I would have spent an entire day reading through the various events. It has a very nice pictorial and entertaining way of representing that is easy for anyone to understand.   [caption id="attachment_1642" align="aligncenter" width="696"] 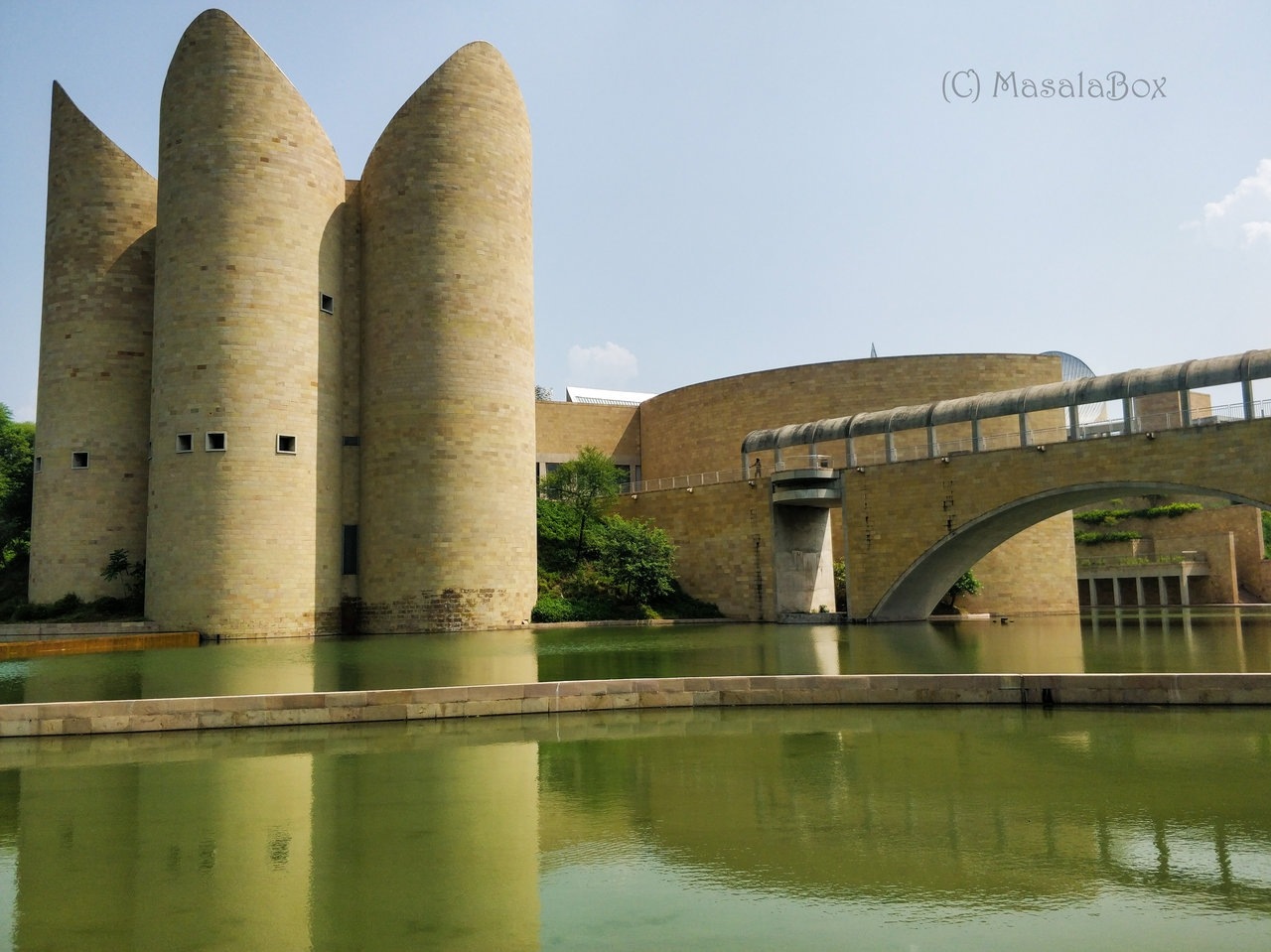 Virasat-E-Khalsa - museum on SIkhism[/caption] My getaway to Gaj retreat started on an adventurous note and ended getting informative about Punjab and Sikhism. I bid adieu to my friends and with the hope that my next destination will be as memorable as this one I moved on to the next city.. To know more about the Gaj retreat and book accommodation, do check out here - Gaj Retreat Punjab   [caption id="attachment_1636" align="aligncenter" width="698"] 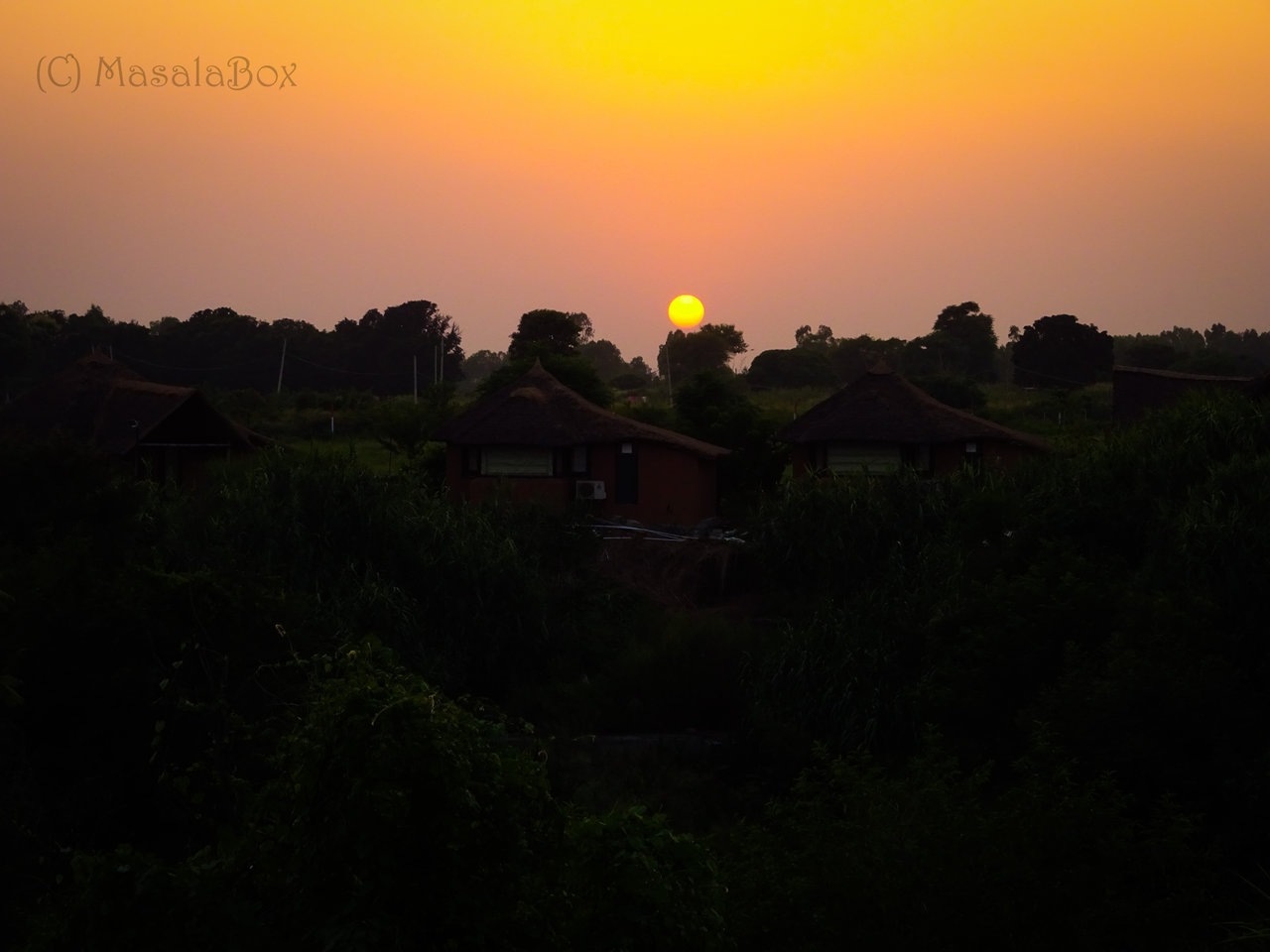 Sunset as seen from my room at Gaj Retreat[/caption] This trip was organized by Travel correspondence & Blogger Group and was sponsored by Gaj Retreat Resort.
Previous Blog

4 thoughts on “Get Adventurous with Gaj Retreat Punjab”

Some swag and sunset.. places to see in Varkala, u