The much awaited movie, Kadal is here. The soundtracks had already gone viral. I have been humming the songs all the time, to an extent that I was even scorned at when i went “Adiye.. adiyee.. yenga nee kootipurae..” But that was how I was when Raavan got released too and I kept saying to myself that Kadal should not turn out to be like Raavan. After watching the Raavan movie, I did not want to even hum its songs. But Kadal got to be different. He has been working on it for quite some time. He had carefully picked the cast. The sound tracks are amazing. The lyrics are as though it was penned down right on your heart. What more can a movie need. Oh! And yes, Arvind Swamy is back in this movie 🙂. What can go wrong? And so I was eagerly counting the days for Feb 1st to arrive! And it did come! We start getting status updates on Facebook about the movie. Some put up disappointing messages, one adds a suicidal picture, one says it is the best, one says it is average. Never mind, I will go out and find for myself. May be people did not get the movie by the master and hence they are giving average reviews. And so I book the Saturday noon show along with few friends of mine. Yayy! I am all set to watch his movie! A Mani Ratnam movie in theater after two years!

The movie opens with Arvind Swamy who still looks charming and Arjun as fit as ever. They clash with each other and from then on the story is all about good vs evil. Well, evil cannot triumph, so how does good triumph over evil is the rest of the story. Then the scene changes and an innocent kid who does not even realize that his mother is dead, is shown. Further five minutes goes around the poor child walking behind his mother’s corpse with Chithiraiae Nilla song. Well the lyrics and the song were obvious and this was the scene I was expecting. The next ten minutes goes around how the child is being ignored by the society, how he cries of hunger and how he gets bullied over, which is very heart rendering. The scenes are shot as though a really grieving child has been captured and it is nowhere like acting. The ignored kid turns into a young angry ruthless boy who bullies others. Arvind Swamy as father Sam gets posted to a church in a small fishing village near Thoothukudi. Good homework has gone into depicting the life of the fisherman, the dialect of the people in south Tamil Nadu and even the bad words which is quiet commonly found. Father Sam wins the heart of the people and the people regularly start visiting the church regularly for prayers. He takes special interest on Thomas, called as Thomae. He shows the right path to live for Thomae and Thomae grow into the young adult played by Goutham Karthik.  Thomae meets Bea (Tulasi Nair) who runs from a hospital shown as though she is afraid of hospital and needles. While the story is revolving around the young Thomae trying to find an identity in the society he lives, Father Sam trying to spread love to the people, Arjun comes back into the picture. Arjun plays the role of Bergmans. Bergmans uses the opportunity and in spite of Father Sam being good to him, plays a cunning trick which pushes Sam to prison. While Sam is at prison, Bergmans influences Thomae and Thomae follows Bergmans’ path believing it to give him some identity in the society. He does everything from murder to smuggling for Bergmans. Meanwhile he also keeps meeting Bea and the two falls in love. Sam is back from prison and returns back to the same village where he is looked down. Thomae starts feeling shameful of his acts and with Bea’s love he once again starts walking in the right path. Bergmans wants to prove that evil triumphs all the time and so he decides to kill Bea, Thomae and Father Sam. How the good triumphs over evil is the ending. 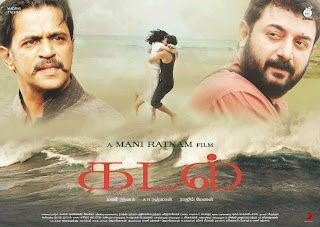 The artists are great, be it Arjun or Arvind Swamy or Goutham, they all have played their part very well. Mani Ratnam has got the best out of every actor. Elay Keechan was shot very well. Goutham looks charming in this song sequence. He has well fit into the role and has done justice to the role being a debutant. Chithirayae Nilla comes in bits and pieces but the apt timing of the song coming in the movie is a plus. Nenjukullae may not be so impressive. Adiye! When i heard this song, I was so hooked to it and the biggest question that was always pondering in my mind was, “how will it be shot?” The style of the song is like that. Mani sir has also got confused with the style of the song, did not know how to shoot it and what a disaster! Out of nowhere a song, dressed up like demons with a pathetic choreography! The romantic song turned out to be a funny one.. Moongil thottam was very beautifully shot among the Andaman beaches. Anbin vaasale is the closure song!
The shots in the sea, the climax scene, the shoot in the Andamans are all so beautifully captured. The story has a philosophical message that love, justice, goodness always triumph and it can change even the bad into good. There is a good story, good performances, good songs, good cinematography, good message then why do we find the movie average! Yes it has a good message but.. The message is conveyed as words not as a feel. Do we feel overwhelmed with love and walk out of the theater with the thought that we should never go in the wrong path? No, we run out of the theater that the movie is over! Rather than being involved in the movie, I landed up laughing. The kid who helplessly walks in the first few scenes makes us to walk along with him helplessly which is missing in the rest of the movie. How did Mani sir miss the emotion quotient in the movie? A simple dialogue like “yenaa nee yen nanban Deva” from Thalapathy or “neenga nalavara ketavara” from Nayagan gave a stir inside us. Not one can you remember like that from Kadal. The lump in our throat when the young Amuda cries out as “amma” and Nanditha Das has to walk away, the tear of happiness when Revathy and Mohan unite, the rush in us when people form a human chain in Bombay, the sadness when Anjali does not wake up, none of such feeling we ever get in the movie. One of the supposed to be best scenes where Thomae confesses about his evil deeds to Bea and Bea shows him the right path, turned out into laughter riot when the heroine wipes the heroes hand and says, “pochu pochu”!! Like two kids playing with sand and then wiping each other’s hand! Telling a hundred times “Sathan will win” sounded so artificial. Do we feel bad when Father Sam is beaten up by the village people, No.. Do we feel sad when Bea is fighting her fears, No.. Do we want to stop when Thomae takes the evil path, No.. Do we feel happy when Thomae stands by the righteous, No.. Do we feel intense when Thomae holds the just born in his hands, No.. Do we feel sorry for Bergmans, No.. Do we feel at bliss when Thomae and Bea unite, No.. What do we feel? We feel sad about the story line, pity that the performance has gone waste, helpless to find the brilliance missing, funny at the wrong play of emotions. The only good part of the movie is, usually Tamil movies project the heroine as though they are half minded and the hero falls for it but in this movie the heroine is declared as having psychological troubles. So that comes as a relief when you think, “Oh not in Mani sir’s movie! Please don’t show heroine like a dumb head!” Anyways, the hero still falls for her!

If you are a fan of Mani sir, you will appreciate the direction, the minute details he has brought out, the message he is trying to convey, the cinematography and much more. Because when you love someone’s work you will always try to appreciate the good things and hope for the best. But if you are not his fan then the movie might not offer much.
With all that.. Phew.. Sir, we are waiting for your next movie. I will still watch it in theater. And hopefully I will walk out of the theater with an urge to watch it again.