MasalaBox Reviews /
Years back when I moved to Bangalore, I shifted to a hostel. My belongings in that hostel were a single bed, the size of which I guess was specially designed such that you cannot move to your left or right, forget about rolling in it! And the other thing was half of a steel almirah aka the old wardrobe. Back then, I used to dream about all the comforts I had left behind in search of my independence, and I ardently wished to have a place with such comforts!
Years later when the trend of letting out furnished houses clicked in, I quickly adapted to it and moved into a house that had the luxury of sofa, TV, and to use kitchen along with appliances. I have no shame in confessing that I love the comfort and am a sucker for luxury. My dream of moving into a furnished house got fulfilled not only because the system was in place, but also the willingness to adapt to the new trend. And now I have a new dream! And after getting to know about Rentomojo and their #SmartlyOwn concept, I guess this will work out too.

Let me tell you about my dream first. I have this new found love called Slow Travel. Visit a place, go through the streets of the city, learn the way people live there, visit the daily market, learn the local cuisine and cook, have my vehicle and drive around, it is about just there in that place. Not a one-day or two-day stop but spend quite some time there. How about may be a month?
Recently, when I was traveling to Mumbai, I had this serious wish to live in some nice neighborhood and spend over a month there. There are so many places to see there actually! And companies like Rentomojo which lease out furniture, appliances, and two-wheelers will help me fit into this idea very well. All one needs to do is pay RMI (rental monthly instalment) for the products that one wants to use and rent it to own. I picked the idea from the increasing number of travelers who are shifting to a nomadic lifestyle and work remotely. This suits anyone who is uncertain about their plans or duration in a city. It then makes sense to rent out the furniture and appliances rather than buying them.
[caption id="attachment_2125" align="aligncenter" width="960"] 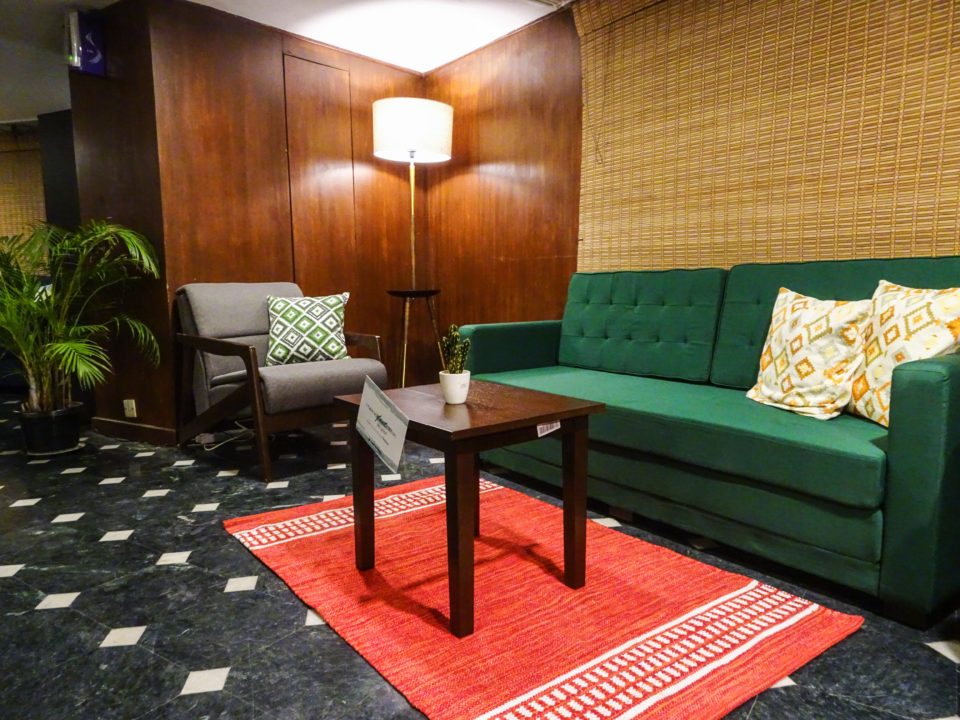 Founded in 2014 by IIT alumnus Geetansh Bamania, Rentomojo started as a rental business. Since then, it has evolved as a fintech model where the customers can lease furniture, appliances, and two-wheelers by paying an extremely affordable RMI (Rental Monthly Instalment). While the renting or leasing out the furniture and appliances itself is a fairly new concept being adopted by India, Rentomojo also believes that a lot of customers might want to own the products as well. Hence, they have announced a new proposition called Rent-to-Own, where the customers will now be able to rent until whatever time they want, after which they can return or own the products. [caption id="attachment_2128" align="aligncenter" width="1026"]

Geetansh excited about RentoMojo :)[/caption]   While I was of the impression that renting out furniture or appliance will not be for more than three months max, Geetansh showed data which indicated that the average rental tenure of their customers is somewhere between 12-18 months, and sometimes even 3 years. With such long-term tenures in the picture, it is very much possible that the leaser might want to then own these products as well, and Rent-to-Own can very much become a thing.

What I was still not convinced on was the fact that if the tenure I am looking for is two to three years, why would I rent furniture and appliances against buying them? Above all, we do get No Cost EMIs these days. But Geetansh from Rentomojo placed counter-arguments to convince that RMI is a better option than EMI. The concept of both is the same, you don't want to lock your money into one depreciating asset. But still he showed calculations to justify that RMI will turn out cheaper than EMI. [caption id="attachment_2129" align="aligncenter" width="1073"]

Benefits of RMI vs EMI[/caption] But the add-ons were what seemed exciting. For instance, after renting furniture or appliances if I get bored of them in a year or so, I can swap it for something new and flashy! That is like redoing my home as per my whims! And then there is zero maintenance fees. If something goes wrong with the appliances, which is not deliberate or major damage, then Rentomojo takes up the cost of fixing it. There is also an annual clean-up service. If you are uncertain and have to vacate a city before the tenure ends, then there is no pain of selling your stuff, you can always close you rental. Better still, if you are moving to a city that is also serviced by Rentomojo, then they take care of your relocation!! If you have decided to settle in a place and have settled in comfort with the products you rented, then you can as well decide to buy them. Factors like this ease the life of a person who is constantly on the move between the cities! [caption id="attachment_2130" align="aligncenter" width="960"] 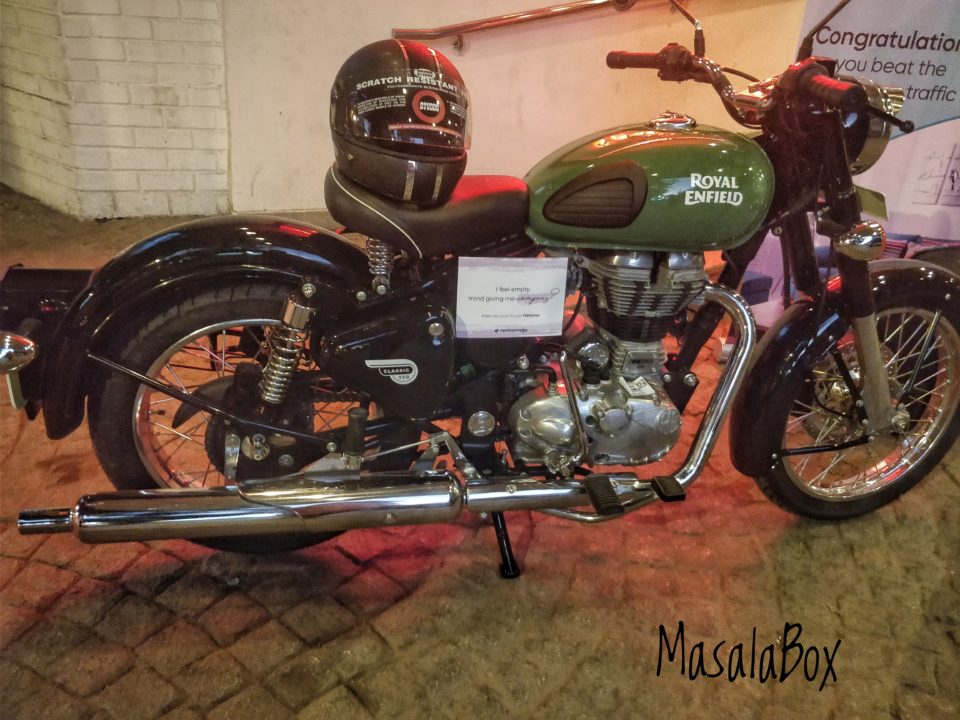 My current heartthrob :D - Rent Bike wit Rentomojo[/caption] We had a bloggers meet scheduled with Rentomojo, and this beautiful shiny Royal Enfield was parked at the entrance. I don't even know driving, but I had this kind of some serious craving to go on a road trip hiring that bike. I need not even spend lakhs and buy it right! May be some day I will learn to ride a bike, rent out this bike, ride to another place, rent out furniture, stay at that place for months and explore it at my leisure with all the comfort of a home. Like, rent out this simple coffee table and call fellow travelers and have a chat over coffee. Sounds exciting no? :) [caption id="attachment_2126" align="aligncenter" width="960"]

Most Romantic Destinations in India that I have been to

#WhyDrive – Hire Car to go on a Savaari

When the cloud disrupts the view but gives a lot o

The sun decided to dunk inside a water tank 🌞 W

This website uses cookies to improve your experience while you navigate through the website. Out of these, the cookies that are categorized as necessary are stored on your browser as they are essential for the working of basic functionalities of the website. We also use third-party cookies that help us analyze and understand how you use this website. These cookies will be stored in your browser only with your consent. You also have the option to opt-out of these cookies. But opting out of some of these cookies may affect your browsing experience.
Necessary Always Enabled

Performance cookies are used to understand and analyze the key performance indexes of the website which helps in delivering a better user experience for the visitors.

Analytical cookies are used to understand how visitors interact with the website. These cookies help provide information on metrics the number of visitors, bounce rate, traffic source, etc.

Advertisement cookies are used to provide visitors with relevant ads and marketing campaigns. These cookies track visitors across websites and collect information to provide customized ads.

Other uncategorized cookies are those that are being analyzed and have not been classified into a category as yet.