My very first blog post was Kadal. Back then there was some kind of anguish in me, like a mother has on her child. Like even though she knows her child is at fault, she would never let the child loose face in front of others but will always have the nagging feeling inside her as why did the child do such a blunder! With this anguish Kadal was penned down and thus this blog series called Masala Box started. Even though there were two successive flop movies, the moment Ok Kanmani got released, I was looking for first day show! Did not happen, next day Karnataka bandh 🙁 Finally when me and my friend were looking for a show all the theaters had only the front row left out! Well anything for Mani Ratnam sir, and hence we sat on the corner seat of the front row and craned our necks to watch the movie.

OK Kanmani is a beautifully woven love story. It is about an aged couple Ganapathy (Prakash Raj) and his wife Bhavani (Leela Samson) living in the suburbs of Mumbai. Bhavani is suffering from Alzheimer and forgets small things like whether she had her meal, whether she had just peeled the peas, the people she had just met, etc. Yet Bhavani does not forget how they met, how they got married, how they love each other, her care for Ganapathy and her love for music. Bhavani’s Alzheimer reaches second stage where she starts forgetting her love for music, forgets her way home yet she remembers her husband. Ganapathy nurses her day in and day out with utmost care, without showing any despise over the fact that his wife is now a burden. Their love for each other makes them going and live content. It is looking at such long committed relationships that the young couples work out the differences and look for life long happiness through every day hurdles. Ok, now you are wondering where is Dulquer and Nithya Menon and what sort of review am writing. Honestly I would have been very happy if the movie was just around Ganapathy and Bhavani with loads of melodrama; I would have walked out happily wiping off my tears.. But no, there is more to the movie..

Adi (Dulquer), a computer game developer comes on work to Mumbai and meets Tara (Nithya Menon) at his friend’s wedding. Both are independent, career ambitious people who do not have interest in the concept of marriage. Even we would say this looking at lovey dovey couples, “Aasai arubadhu naalu, mogam mupadhu naalu”. Adi and Tara also has similar views, why to unnecessarily get married, fight, raise kids and clean their shit! Deep down Tara has a past of growing up watching her parent’s ugly marriage life and hence detests it. Before you could blink your eye, they exchange numbers, go out, hug, kiss and do ‘matter’. You know with a man like Dulquer Salman, matter will of course happen. Now Adi finds it inconvenient to visit Tara at her hostel all the time and hence proposes live in relationship. So Tara moves in with Adi who is staying at Ganapathy’s house. The rest of the movie is about, how they give each other their space, are they ready to make compromises, does love happen in this process, do they learn from the togetherness of the aged couple, do they want to commit or just live for the moment and move on! 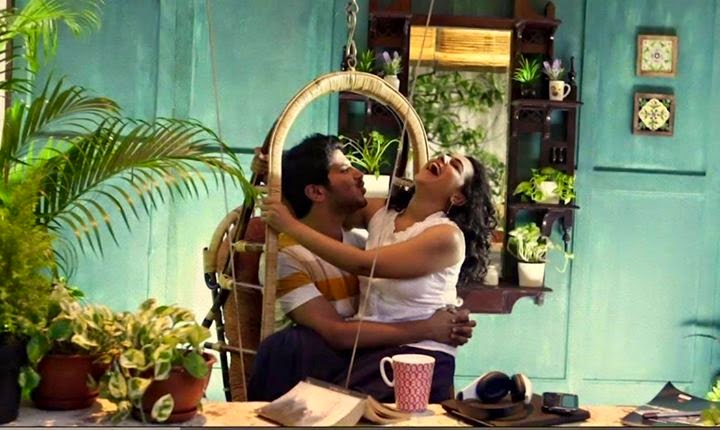 The performances of all the actors were just awesome. Though the first half was little artificial with the leads trying to be like cool dudes; the second half was more like Mani sir must have just kept the camera rolling and shot some real life happenings. That was how much the characters had gotten into the movie.. Leela Samson, oh my! What a class and what an acting. She just rocked her role as an Alzheimer patient and the humor around her role is just awesome. And so does Prakash Raj, gives a neat performance. The handsome Dulquer and peppy Nithya Menon have worked their roles with much ease. Mani Ratnam has a way of beautifully weaving romance between his leads and so does the chemistry between the lead pair sparkles. Songs are mostly chucked in here and there and some of it passes through like background score. Needless to talk about cinematography. There are legends involved in the making of the movie and it is obvious that only good stuff comes out of them.

Coming as such to the movie, it actually has no great story line. It takes the present age conformism of live in relationship and portrays it with subtle every day humor here and there. He does not want to argue the pros and cons of it. He does not want to argue if it is right or wrong to have pre marital sex. He does not explore, what happens if she turns pregnant, what happens if they break up, will they go ahead and start living with someone else, what if they did not feel connection after their first make out, nothing as such like that. He just tells; there is a guy, there is a girl and they are in a live in relationship. You definitely do not have the eagerness to know if they will get married. And you neither feel anxious if they will break up and go in their ways. You just watch, at the distant boat sailing away deep into the calm sea not creating any ripples, not disturbing you. Those who are in love and those who are in live in relationship would have felt a cool breeze along with it, reminiscing their courtship days and the fights over silly things. It does have a beautiful message with it,

“Whether it is arrange marriage, love marriage or live in experiment marriage, the ultimate thing is to get married to the right person so that you love, compromise, live happily and hence cleaning you baby’s shit will no longer be yuck :D”

Me: Heyyy
Friend: Hmmm?
Me: What de they did matter so quickly!
Friend: Whaat? That is what is happening nowadays na.

Me: Everybody sleeping with everybody? 🙁
Friend: You and me are like Prakash Raj! That is why we are like this! And they are like that..
Me: What de, everything in life is justifiable is it?
Friend: Mani Ratnam is in his late 50s and has taken this gen movie. You are still stuck with Mouna Raagam which came in 85 when you were born! Grow up!
Me: I don’t want to grow up.. I am confused.. There are things I liked in the movie and there are things I don’t like. I like or no like?! What do you think..
Friend: Keep blabbering!
Me: There is lot of love, we can watch it for that..
Friend: Yeah yeah, go write your review..
Me: But should I say, “it is awesome go watch it” or say, “can watch once?”
Friend: It is Mani Ratnam movie, nobody cares about your review, they will watch it!True that! Ok Kanmani – Ok Ok