India / MasalaBox Reviews
The golden rays of the morning sun were illuminating the Bandhavgarh hill as we drove into the jungle. The chill of the December winter was very much in the air and I wrapped myself in the blanket despite the already many layering I had. Tiger sighting and wildlife safari is probably the most underrated adventure sport in India. It is indeed kind of addiction, once you get used to the kick of driving into the unknown and wondering what nature is going to surprise you with, you want it more and more. Hopping into an open jeep, listening to the many famous stories of the jungle narrated by the forest guide, cold wind gushing through the hair, driving on the muddy bumpy road, passing through the many sceneries, stopping by to listen to the silence of the jungle which gets occasionally broken by the chirping bird, spotting the well-camouflaged birds, has become my best travel escapade. And this time I was at the jungle which was once upon a time hunting ground for the Maharajas of Rewa kingdom. Bandhavgarh national park named after the hillock hosting the Bandhavgarh fort is home to a high density of Royal Bengal tigers and is teeming with wildlife and birds. The park is divided into four zones and we were on the lookout for tigers in the Tala zone of Bandhavgarh.   [caption id="attachment_1574" align="aligncenter" width="701"] 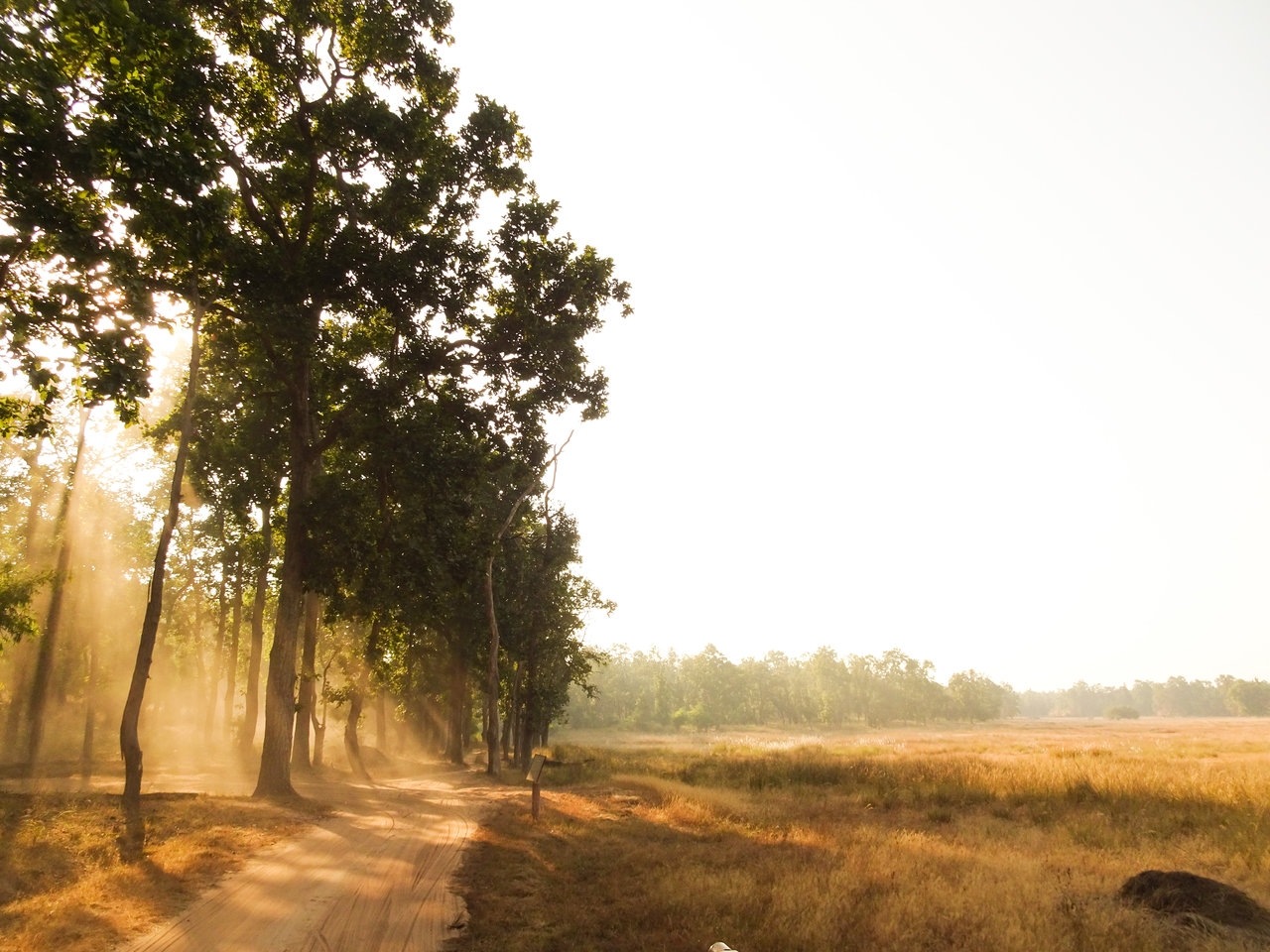 Bandhavgarh National Park[/caption] The Sal trees were towering up on one side and the other side opened to huge grasslands. These kind of grassland clearings are a common sight in the Tiger reserves. These could have been former agricultural lands or village settlements that have been relocated outside the forest as part of conservation. It is such grasslands that give a clear view of the tiger if at all we have the luck of seeing it. The jeep came to a halt near a watering hole hoping for the tiger to turn up. The forest guides and jeep drivers are very knowledgeable. This being one of the usual spots to see a tiger and being early morning, there was a chance for the tiger to come for a drink. A herd of deer came by to have a drink. The last thing I want to see in a forest is a calm and composed deer. If at all there is a tiger movement nearby, the deer would bark and alert the other deer to be cautious. However, these were like at a pool party, drinking water and locking horns. There was no sign of a tiger.   [caption id="attachment_1577" align="aligncenter" width="701"] 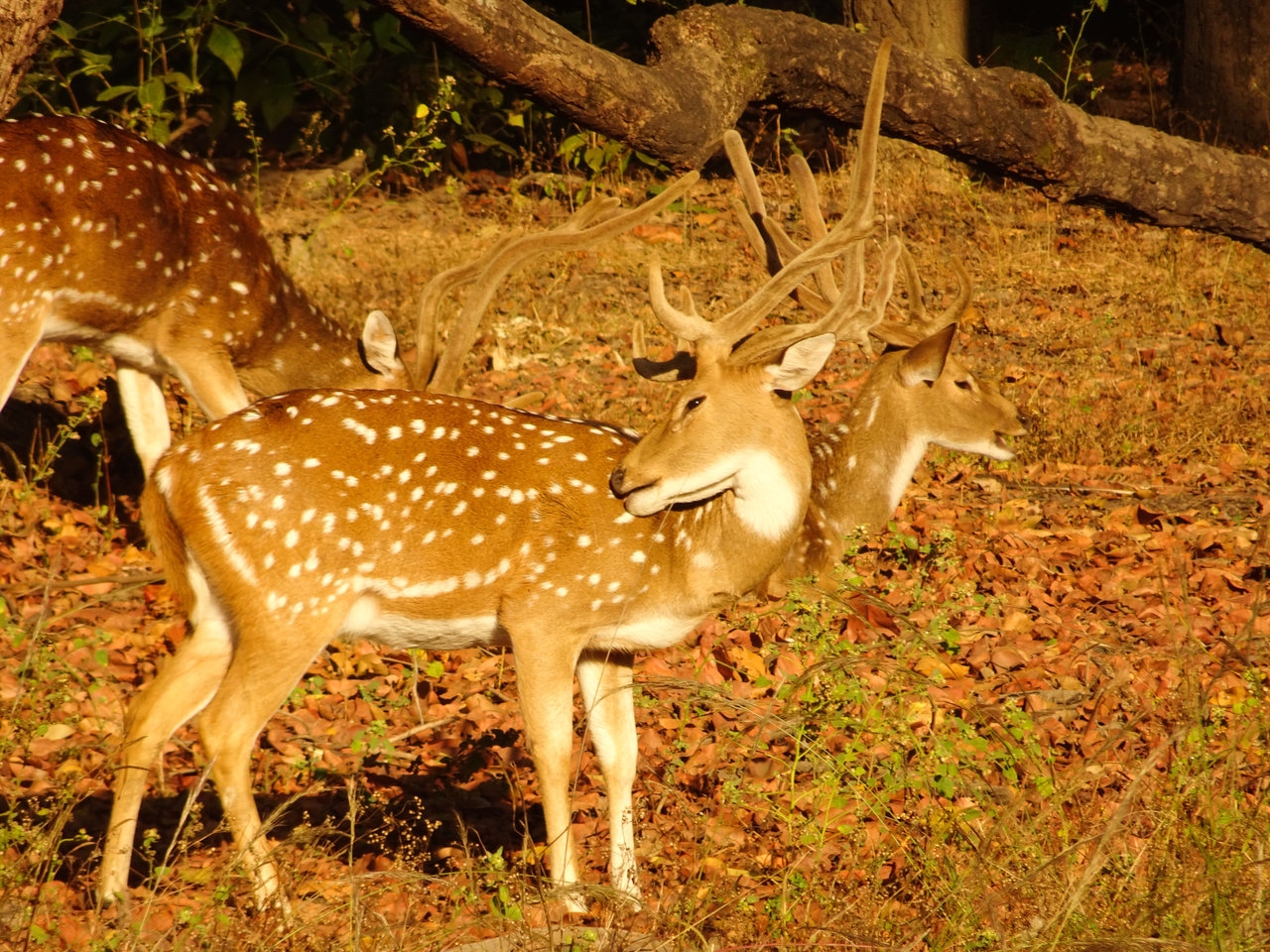 I have two heads :)[/caption] Further down it was now a thick jungle, with tall trees the sun rays were trying hard to penetrate through the branches. The jeep came to a halt and the driver pointed out to the pug marks on the ground. Not just one! Little scurry pug marks all over the place with a bigger pug mark here and there! A tigress with her cubs. “This has to be Spotty”, exclaimed the forest guide. He stood on the jeep seat to have a good look past the bushes. However, the bushes were thick and unless the tiger decides to walk on the mud path it is difficult to spot. We drove back and forth a little and noticed that the little paw marks disappeared at a short distance and only the big paw mark continued. Which means the mother has hidden her cubs among the bushes and has gone for a drink or could be for a hunt. The cubs were just a few months old and they will not come out unless their mother gives a call. I have never seen tiger cubs before and my previous tiger sightings at Tadoba were all from a distance. So the craving to see the tiger cubs were now high and I wished they would come out to play for a while. We drove around the patch of bushes for a while but the cubs were nowhere to be seen nor their mother. We arrived at a T junction and decided to wait with the anticipation that the mother will eventually come to her kids this way.   [caption id="attachment_1579" align="aligncenter" width="694"]

Pug Marks[/caption] The silence of the forest was broken by the chirpy parakeets and the sweet sound of cuckoo. I decided to sink in my seat and listen to the musical concert. Half an hour passed. I was still looking through the canopy of trees. The place was teeming with birds. Indian roller, woodpecker, rose-ringed parakeet, crested serpent eagle, so many birds were putting up a show. Half an hour turned into one hour and we were still at the same spot wondering if we should wait for the tigress or go in search of some other tiger. But patience is the key to spot wildlife in the jungle, so we decided to give some more time.

On a morning safari we stopped our jeeps just to listen to the song of this Rose Ringed Parrot.. While other jeeps came rushing towards us thinking we had spot a tiger and so have stopped, we said, "Oh! We are just listening to the bird up there." Jungle safaris never disappoint if your goal is not just the Tiger spotting.. . . . . . #birds #naturephotography #naturegram #birdsofinstagram #wildlifephotography #parrot #RoseRingedParrot #bird #oncology #jungle #MPtourism #Bandhavgarh #birdsighting #birdsofIndia #incredibleindia #indianbirds


Three hours had passed and I was losing hope. This was my day 2 safari and the previous evening also was not fruitful. The driver started the jeep and stopped at center point so as to have the breakfast that the resort had carefully packed and loaded into the jeep. Bandhavgarh is the first national park where I have seen tea stalls selling snacks in the middle of the park. I would have just taken a couple of bites of my sandwich when the guide and driver dropped their cups and ran towards the jeep. Alarmed, I looked at them bewildered. He pointed to the direction from which we came and that is when I listened carefully, a distant bark of the deer!!   [caption id="attachment_1576" align="aligncenter" width="510"] 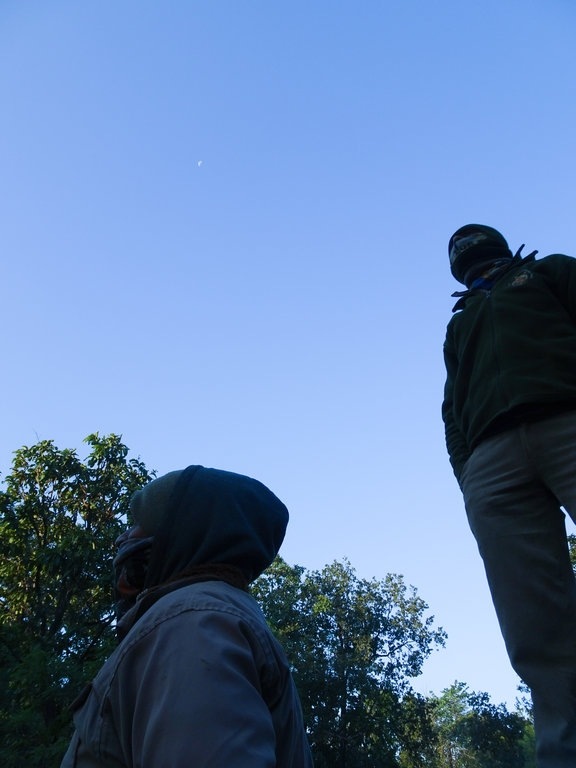 Looking out for the Tiger. Can you see the moon too?[/caption] The jeep driver immediately steered the vehicle in the direction of the bark. The single deer bark was joined by one more deer. My heart was pounding now and I was desperately praying to get a glimpse of the tiger. The driver stopped the vehicle again at the T junction with hopes to see the tiger. The bark intensifies, there is a ruffle of bushes and then a figure moves in a distance. A couple of more jeeps joined and others were trying their best to get a view. She walked slowly through the bushes towards us. The Yellow and Orange tinge came closer and closer. There she is! I was now standing on top of my seat with excitement. What was it dangling from her mouth? I tried to look harder and my guide was elated. She has a kill in her mouth, exclaimed the driver. We could see a dead fawn in her mouth. She walked closer and closer. That majestic walk, gentle yet felt thunderous, least bothered about the presence of the human, with the fawn swaying from her mouth. She was spotty. She was taking the kill to feed her cubs. I could feel a lump in my throat and went totally numb. Never have I seen a tiger before from such proximity. Her sheer size made me feel so puny and was awestruck by her beauty. She was huge, one sway of her paw was enough to put me down. The guide asked me to take video and all I did was just froze! She gave an eye contact and moved past our jeep. Walked past the path and disappeared into the thick bushes walking towards her kids.   [caption id="attachment_1582" align="aligncenter" width="706"] 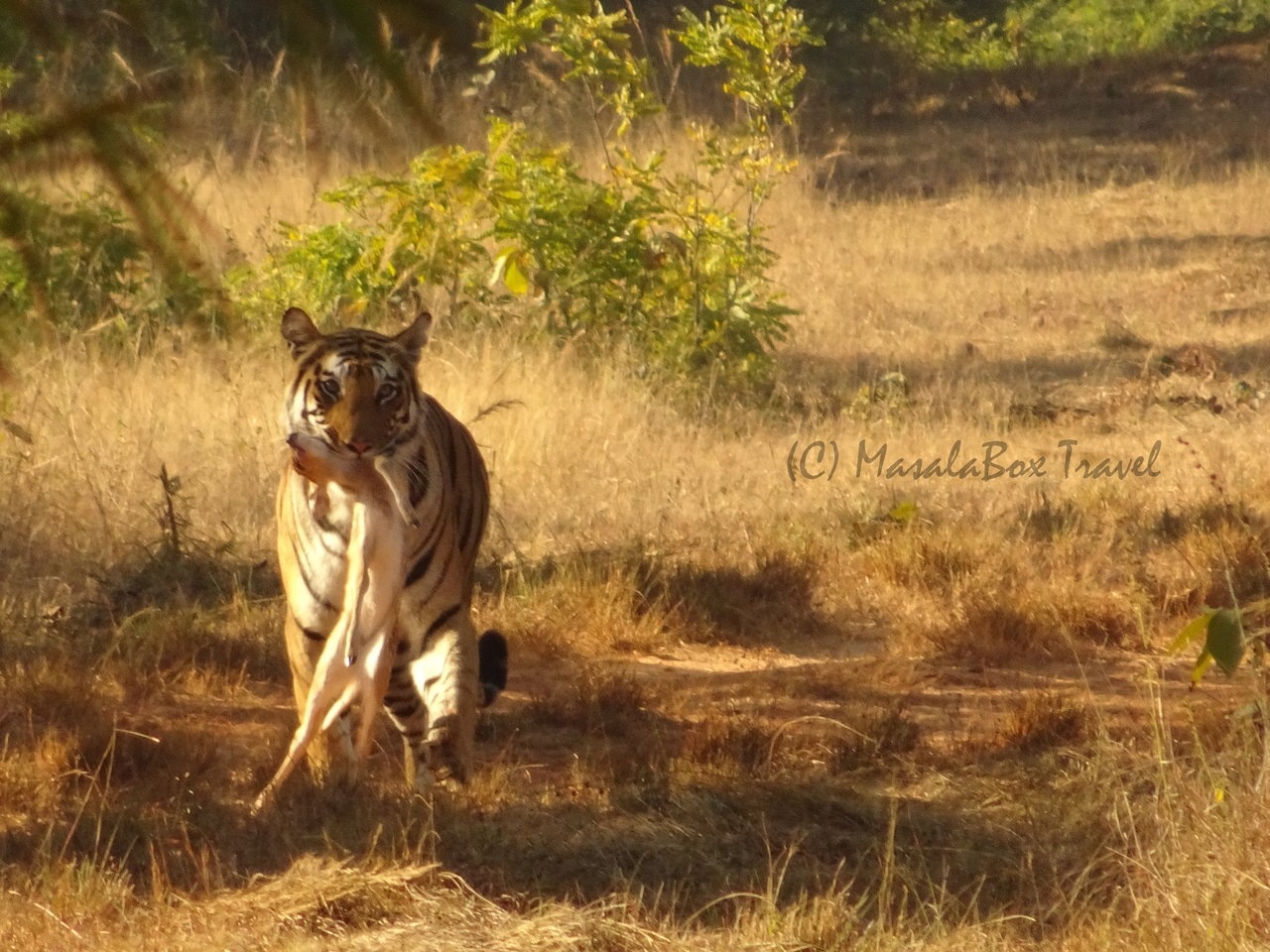 The most cherished moment, when Spotty locked her eyes with mine..[/caption]   [caption id="attachment_1578" align="aligncenter" width="709"] 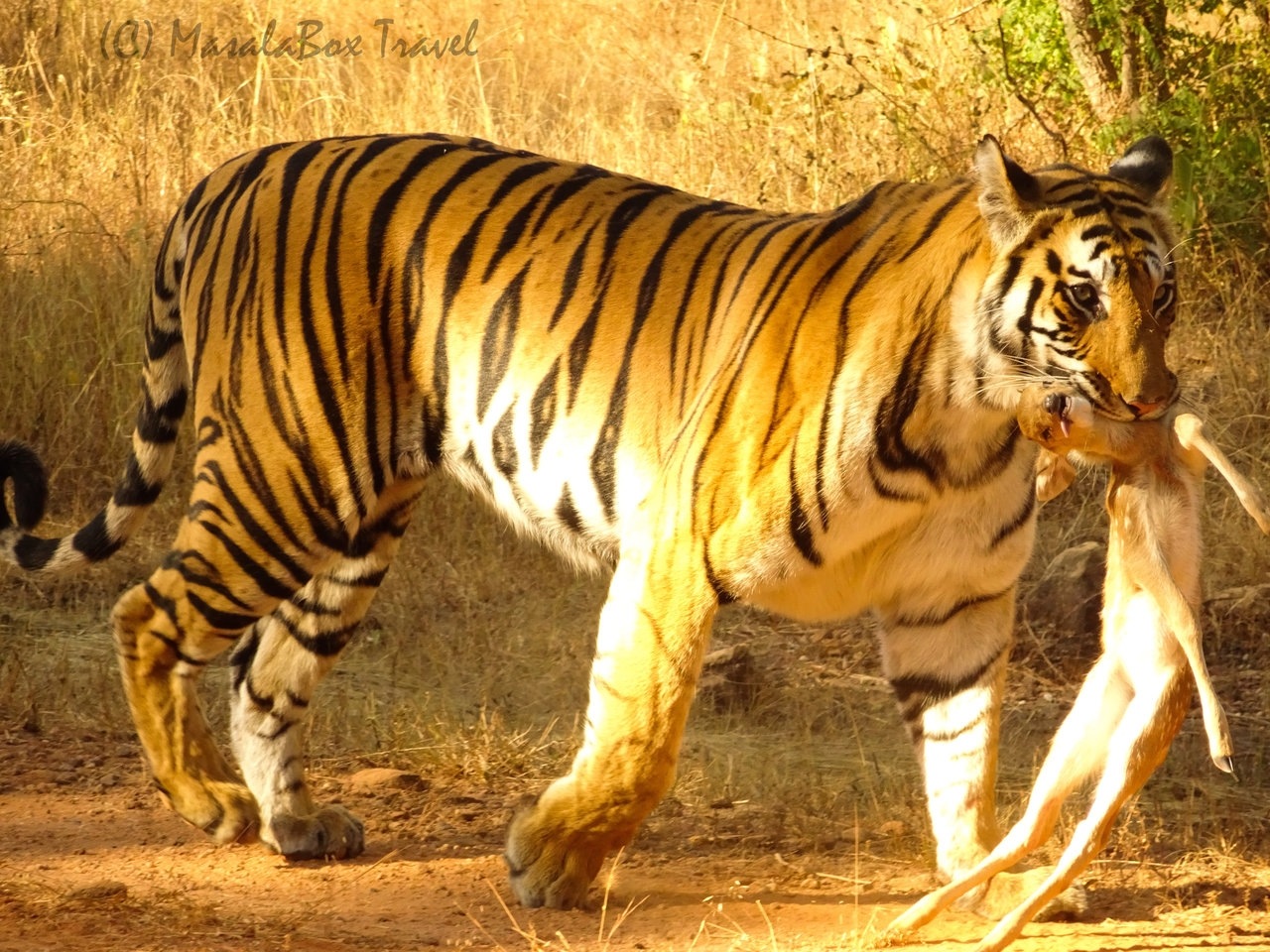 Spotty Tigress of Bandhavgarh walking with the kill[/caption] I froze into my seat with what I had just witnessed. The forest guide and the driver were elated too. That is how the jungle is, it is filled with stories. It is the same forest, the same zones, the same trees and the same inmates but every safari has a different story to tell. Its new every time you go on a safari and a bond gets slowly developed with the wildlife. I will never hesitate to make another trip to Bandhavgarh. This sighting was in December 2016 and by now the cubs would have grown into sub-adults and will be on their own journey. Hope I get to meet them soon. If you would like to visit Bandhavgarh National Park, here are some tips:

How to reach Bandhavgarh National Park:

The nearest airport is Jabalpur and Khajuraho from where another 5hrs drive or so is Bandhavgarh. It is better to have your own vehicle from any of these places as the roads are not so great, there are no direct buses and more importantly, these buses consume a lot of time. If planning to go by bus, Umaria is the place you should hop to before taking a bus to Bandhavgarh. [mappress mapid="16"]

The park is open from October to June. And as a thumb rule, summers being the best time to spot wildlife.

How to book wildlife safari at Bandhavgarh:

You can book for safaris through the Madhya Pradesh Tourism National Park Website - Forest department of Madhya Pradesh Input your dates and look for available slots and book the same. A valid ID card needs to be presented at the counter in the park. Jeep and guide charges are extra from the safari ticket charges which you be paying online. You can take an entire jeep for yourself or look out for other travellers and join along. You can also book tickets across the counter, I am not sure if a few tickets are reserved for off the counter sales. But I read that you need to be early at the counter and be in the queue for the same. Tip - The morning safaris are longer than the evening safaris.

I stayed at the Tiger's Den Resort which is very close to the Tala gate. The resort is one of the oldest in the region they know very well about the park, Bandhavgarh town, local places to visit and help you with arranging jeep pick up from the park. They have few furnished spacious cottages with room heater provision and some newly constructed rooms and a swimming pool. During the leisure time when you are not off to safari, there is a library, a souvenir shop and also a fireplace to sit around, sip tea and meet fellow travellers. The food here was another highlight. Got to taste some Madhya Pradesh specialities and it was a great spread of buffet. Having an experienced manager who tells you interesting stories from the jungle was another highlight. If you are at Bandhavgarh would recommend a stay here. Book your stay at Tiger's Den here - Click here    [caption id="attachment_1581" align="aligncenter" width="700"] 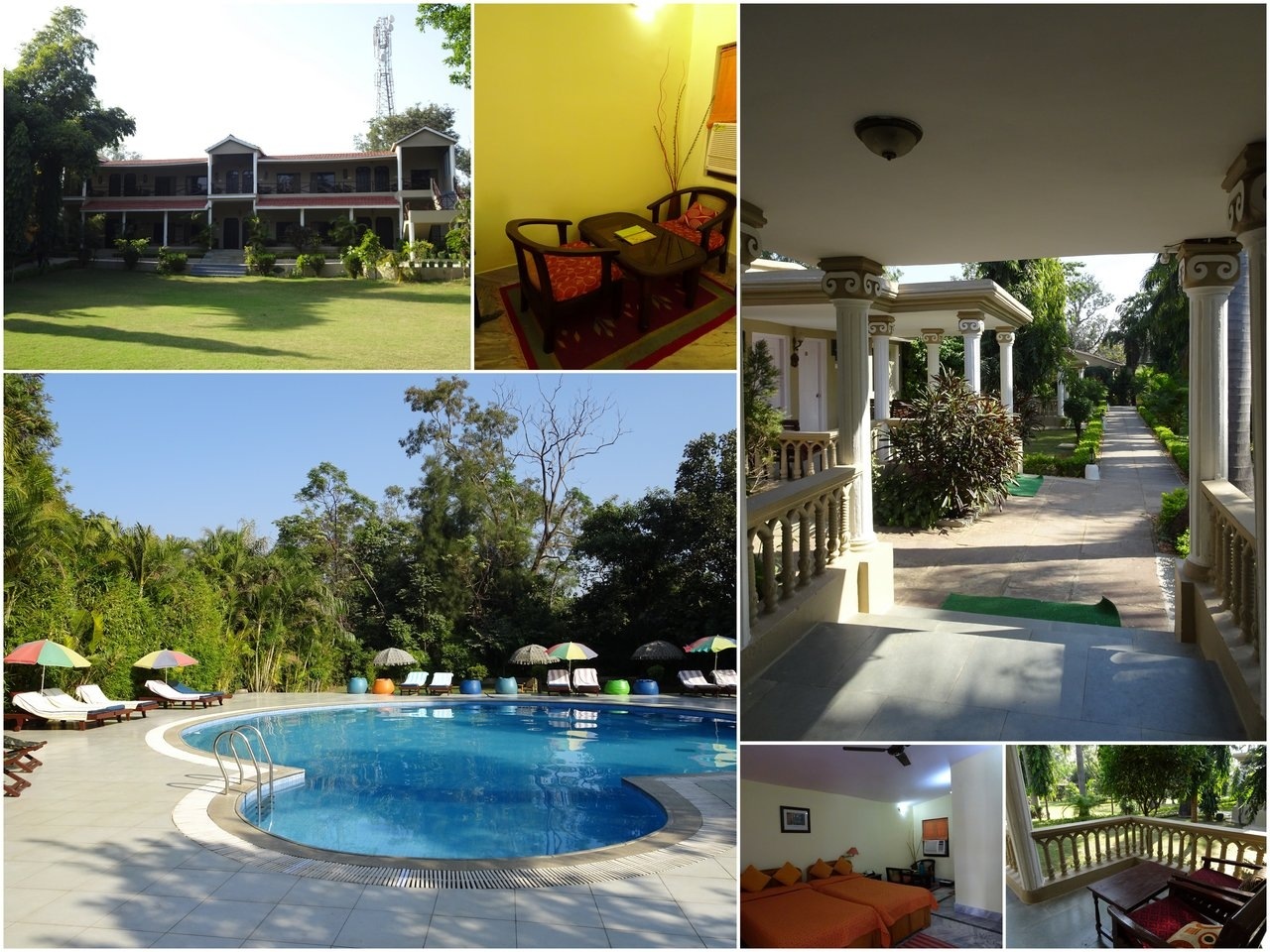 Pictures from Tiger's Den Resort[/caption] Note: This is not a sponsored post. Pin IT for your board   [caption id="attachment_1572" align="aligncenter" width="663"] 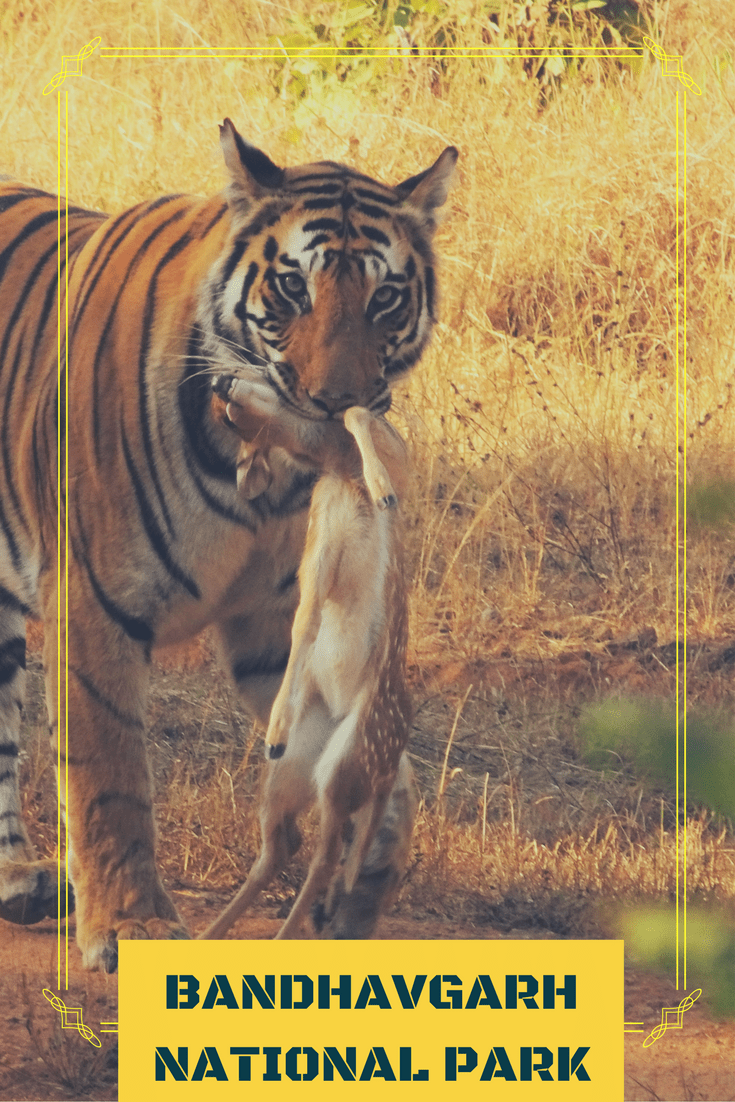 Onam Sadya and other food delicacies to drool from Kerala

Porbandar Tourist Places – A Day in the City